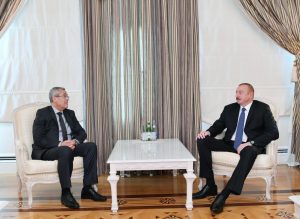 President of the Republic of Azerbaijan Ilham Aliyev has received Minister Delegate to the Head of Government for the Reform of Administration and Public Service of the Kingdom of Morocco Mohamed Ben Abdelkader.

The head of state hailed the development of relations between the Republic of Azerbaijan and the Kingdom of Morocco, underlining the two countries’ constant support for each other within international organizations.

President Ilham Aliyev noted the necessity of achieving good results in economic and regional development, expressing his hope that Mohamed Ben Abdelkader’s visit to Azerbaijan will have a positive impact on bilateral relations between the two countries and contribute to raising awareness about the country.

Minister Delegate to the Head of Government for the Reform of Administration and Public Service of the Kingdom of Morocco Mohamed Ben Abdelkader described his meeting with the Azerbaijani President as indicative of the development of the existing excellent relations and manifestation of political will between the two countries. Expressing Morocco’s keenness to expand cooperation with Azerbaijan, Mohamed Ben Abdelkader hailed Azerbaijan`s sustainable development achieved thanks to President Ilham Aliyev’s efforts and leadership. He noted that the strides that Azerbaijan has made are followed with great pride by His Majesty Mohammed VI, the King of Morocco and the Moroccan people.

The importance of the Memorandum signed between Azerbaijan`s State Agency for Public Service and Social Innovations and the Kingdom of Morocco was hailed. The significance of applying Azerbaijan’s experience in this field in Morocco was underlined at the meeting.

The sides pointed out that the political relations between the two countries have very good history, underlining the necessity of developing economic cooperation.