Home / featured / President Ilham Aliyev: The liberation of territories will be additional opportunities 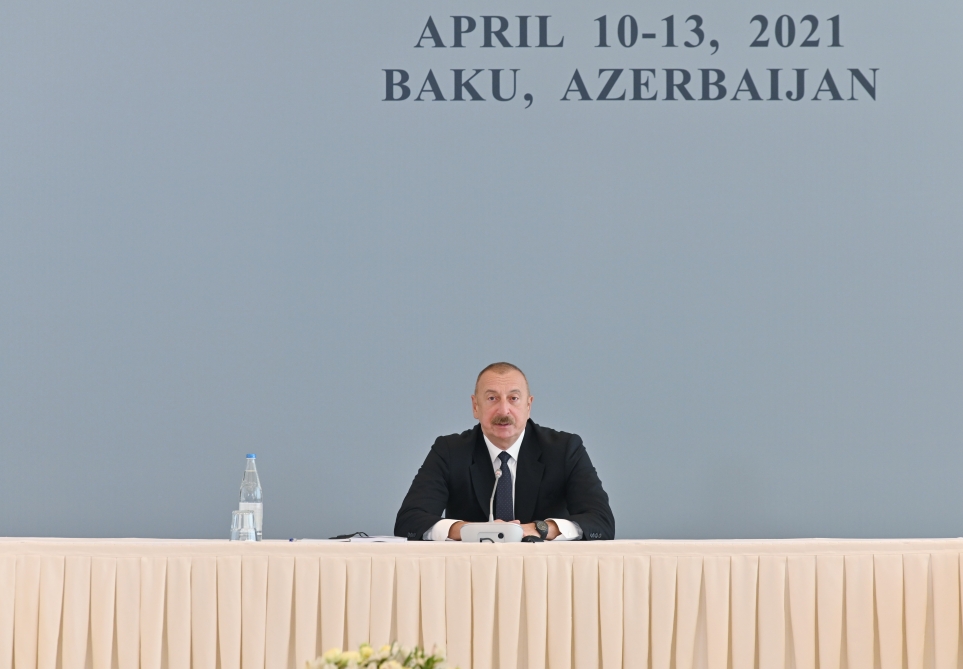 “We actually have elaborated the mid-term and long term development strategy for Azerbaijan even before the war. Of course, the liberation of territories will be additional opportunities, because though the restoration of territories will demand a lot of resources, at the same time these resources will be spent in Azerbaijan. They will stimulate business, they will stimulate construction sector of our economy, they will create jobs, they will create opportunities, they will create additional values in agriculture. Therefore, now we, in a way, have two development programs; first is an annual development program which we approve every year, and also the development program until 2030, and the second is the development program for Karabakh reconstruction which is now only in the phase of beginning. So, now our governmental structures work on combination or coordination between two, in order not to spend twice for the same purpose. And for that purpose in the liberated territories we are now introducing an absolutely new model of governance. There will be different model of governance of presidential administration and there will be very modern approach to development not only during the reconstruction but also after it. Therefore, we are now evaluating all our resources which have been illegally exploited by Armenia. There is a big potential for mining in those areas. By the way, we already started illegal procedures against some so-called businessmen who were illegally exploiting our copper and gold resources on the liberated territories,” said President Ilham Aliyev as he responded to questions at the “New vision for South Caucasus: Post-conflict development and cooperation” international conference held at ADA University.

“Karabakh will generate a lot of GDP in non-energy sector of our economy, also transportation. Three airports are already in the process, in one airport works have already started, railroad connections. Zangilan can become important transportation and logistical hub taking into account its location and close proximity to the neighbors. Industrialization, attracting more investments in non-energy sector, business opportunities. You all probably heard that the leading rating agencies improved our ratings. On the World Bank Doing Business report we are number 28,” the head of state noted.

“So, business climate is improving and we have very educated people and young generation which now is generating ideas and its hope for the future. As I said during the war, the biggest burden of war was on the shoulders of those who were children when I came to power. So, we managed to help young generation to develop. Taking into account, energy resources and completion of all major oil and gas pipelines that will feed our economy with additional sources of supply. We do not depend on foreign aid, our foreign debt is something around 18 percent of GDP, and I put a target to reduce it to 10 percent of GDP which will be then one of the best results in the world. We have very low rate of poverty around 5 percent, when I came to this position it was 49 percent. So, we actually feel that we will be able to implement all our plans, which is with a strategic vision. But for that we need stability not only inside Azerbaijan, which we have for already 28 years, but we need stability beyond our borders. And one of the main concerns will be our steps in order to minimize risks. We have taken obligation of the chair of Non-Aligned Movement with a great success. Our international efforts in the region led to the creation of new formats of cooperation or a trilateral cooperation with Turkey-Iran, Georgia-Turkey, Russia-Iran. So this is also contribution to stability and predictability. Of course, there should be zero risk of revenge attempts from Armenian side. If they do it, I said we want peace, but we will destroy them completely. Destroy them completely and let them not forget what I say now,” President Ilham Aliyev added.