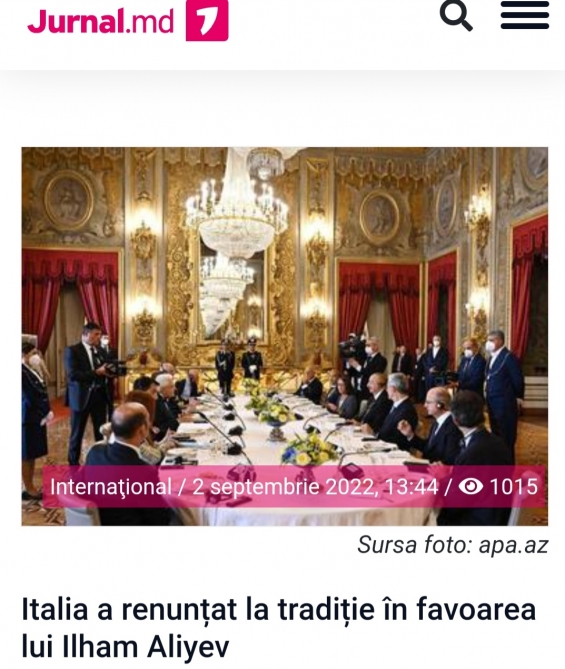 The influential media outlets of Moldova have widely covered Azerbaijani President Ilham Aliyev`s official visit and his meetings in Italy, as well as his speech at the 48th edition of the international Cernobbio Forum.

The articles, published by “Tribuna”, “NOİ”, “TV8”, “Publika”, “Journal”, “Realitatea” and other news portals in Russian and Romanian languages, highlighted President Ilham Aliyev’s meeting with Italian President Sergio Mattarella and President of the Council of Ministers of Italy Mario Draghi.

The articles also featured remarks by President Ilham Aliyev in his speech on Azerbaijan’s contributions to the European energy market.

The articles quoted President Ilham Aliyev as saying: “And the last day of 2020, on the 31st of December, the final part of that major project, TAP, was inaugurated. Since that time, for one year and a half, Azerbaijan became a supplier of natural gas to three European countries, apart from Turkiye and Georgia. 13,5 billion cubic meters of gas have been supplied to Europe for one and a half year, 11,7 billion out of that to Italy. And this year, we plan to increase the volume and we project to supply the Italian market with close to 10 billion cubic meters. Our total export will be more than 22 billion cubic meters and with the great potential to grow.”