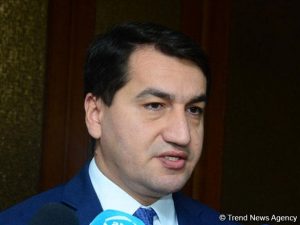 There are plans to sign many documents between Azerbaijan and Belarus, Deputy Head of the Foreign Policy Affairs Department of the Azerbaijani Presidential Administration Hikmet Hajiyev told reporters in Baku Nov. 17.“Relations between Azerbaijan and Belarus cover the political, economic, trade, military-technical, cultural, humanitarian and other spheres,” Hajiyev said.He noted that the trade turnover between the countries is constantly growing.“In the near future, the Azerbaijani president is scheduled to visit Belarus,” he said. “Such visits are of intensive nature, and many documents are planned to be signed as part of this visit.”Hajiyev noted that the visit will give an even more serious impetus to the development of relations between Azerbaijan and Belarus.“These issues were widely discussed during the reception of Ambassador of Belarus to Azerbaijan Gennady Akhramovich by Azerbaijani President Ilham Aliyev,” said Hajiyev.