Program for study of landslide zones proposed in Azerbaijan 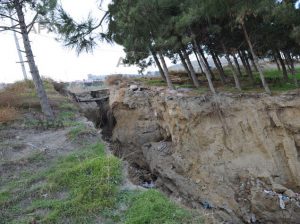 The landslide zones in Azerbaijan occur mainly in the southern and north-eastern slopes of the Greater Caucasus, in the north-eastern part of the Lesser Caucasus, in the lower and middle parts of the Nakhchivan Autonomous Republic and the Talish Mountains, in large river basins.The landslide has been developed from 400-500 meters above sea level to the upper part of the middle hill and along the Caspian Sea.Land degradation and excessive rainfall, seismicity, natural-geological, geomorphologic and hydrological characteristics of the area create sliding conditions.The Republican Seismic Survey Center (RSSC) of Azerbaijan’s National Academy of Sciences (ANAS) proposes to develop a program for a detailed study of landslide zones throughout Azerbaijan, RSSC told Trend on November 28.RSSC noted that the proposal was submitted to the Ministry of Emergency Situations and the Cabinet of Ministers of Azerbaijan.”We have studied and prepared a detailed report on the Bayil landslide zone, which has been submitted to the Presidium of ANAS. The same report was submitted to the Ministry of Emergency Situations and the Cabinet of Ministers.”Some residents living in the area moved to temporary shelters as the Bayil slope in Baku continued to since November of 2017.”In addition, we have also proposed to study other landslide zones located in Baku’s villages of Ahmadli, Binagadi, as well as in the districts of Azerbaijan,” RSSC said.Typically, when the slopes are above 15-20 degrees, the falling precipitation is high and land formed on water-resistant clayey rocks, the sliding conditions become intensified.Anthropogenic factors that arise as a result of human’s activity such as destruction of forests, the movement of heavy trucks on mountain roads, the flow of dirty household water, also play a major role in increasing the sliding conditions.More than 300 settlements and hundreds of economic facilities in Azerbaijan are in danger of landslide.