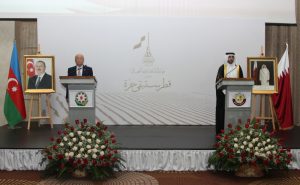 “Azerbaijan has reinforced its international standing under President Ilham Aliyev’s leadership,” said chargé d’affairs of the Embassy of the State of Qatar in Baku as he addressed an official reception on the occasion of his country’s national day.

Khalid Mohammad al-Malki hailed bilateral relations between Qatar and Azerbaijan in all areas.

The reception was attended by government officials, parliamentarians, ambassadors, journalists and public figures.