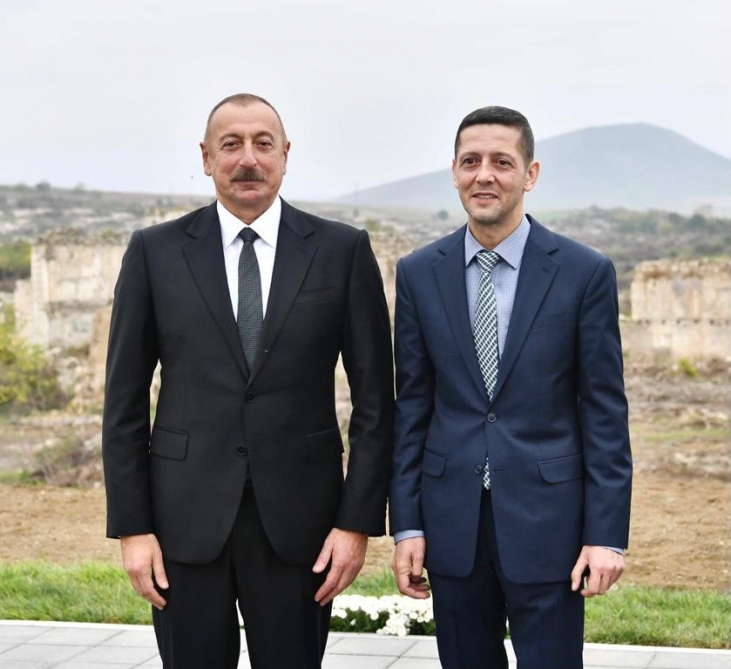 “A Victory Monument will be erected in the liberated from occupation Fuzuli city, which will become a symbol of the liberation of the 44-day Patriotic War.

The sculptural work on the grand columns will be visible from all sides. This impressive monumental composition will symbolize 44 days of the Patriotic War and commemorates the heroes who gave their lives for the liberation of Fuzuli,” author of the work – Doctor of Science in Philosophy of Art, Honored Artist of Azerbaijan Rashad Mehdiyev told AZERTAC.

“The monument consists of three parts – a podium, a stand and columns. Symbol “44” will consist of 44 columns, which symbolizes each day of the war with the victories of the Azerbaijani army. There will be also a memorial stand that will feature the names of the soldiers who died for the liberation of Fuzuli. Technological innovations will be applied in each element of the composition, which will complete the monumental composition and strengthen the idea,” Mehdiyev said.

He noted that the columns of the monument will be made of concrete, which symbolizes the fundamental nature of the victory of the mighty Azerbaijani army under leadership of Commander-in-Chief, President Ilham Aliyev.

“I will do my best to create this monument, which will perpetuate the memory of our valiant soldiers and officers, and will become the embodiment of the historic Victory of Azerbaijan led by our Commander-in-Chief Ilham Aliyev. I am grateful to the head of our state for the high assessment of my work and I promise to create a worthy work that will carry historical information for future generations”, – Rashad Mehdiyev emphasized.