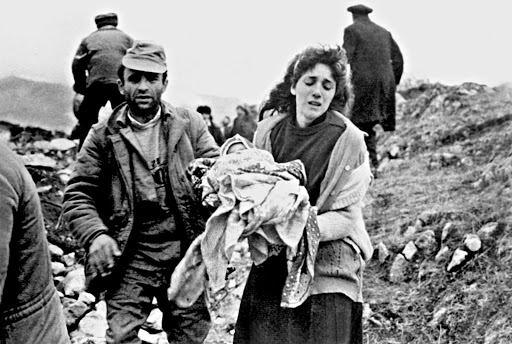 Human Rights Commissioner Sabina Aliyeva has urged international organizations and states to recognize as genocide the mass killing of Azerbaijanis by Armenians in Khojaly settlement in Azerbaijan’s Nagorno-Karabakh region in 1992.

Aliyeva made the remarks in the February 22 statement posted on the website of the Azerbaijani ombudsman’s office on the eve of the 29th anniversary of the Khojaly massacre.

Aliyeva said that the Khojaly genocide that took place before the eyes of the world powers in the late 20th century is a crime committed against not only the Azerbaijani nation but humanity.

“Although 29 years have passed since the genocide, unfortunately, the international community has not given the necessary political and legal assessment to this act of genocide, and the perpetrators have not yet been brought to justice… I once again call on international organizations and states to recognize the Khojaly massacre as genocide and a crime against humanity to ensure that its perpetrators are brought to justice,” she said.

The rights commissioner added that indifference and double standards in relation to this horrible crime against humanity intensified the impunity syndrome in the aggressor, prompting him to pursue a policy of ethnic cleansing and occupation. Aliyeva described as unacceptable the lack of adequate reaction to the Khojaly massacre as it creates a basis for the recurrence of such crimes in the future.

“This horrible crime against humanity was organized by the then political leadership of the Republic of Armenia,” the statement said. The genocide was committed on the night of February 25 to 26 in Khojaly by units of the Armenian armed forces, Armenian terrorist groups in Nagorno-Karabakh and personnel of the former Soviet army’s 366th motorized rifle regiment deployed in Khankandi, Azerbaijan.

Aliyeva drew attention to the fact that the population was killed with special cruelty.

“This crime is a gross violation of the norms and principles of international law and fundamental human rights,” she noted.

“As a result of this horrific crime against humanity, 613 peaceful Azerbaijanis were killed, including 63 children, 106 women and 70 elderly people. At the same time, 487 civilians were seriously injured and 1,275 people were taken hostage,” the statement added.

Aliyeva noted that the fate of 150 hostages, including 68 women and 26 children, is still unknown. During the genocide, 56 people were killed with special cruelty, people’s heads were peeled off, various limbs were cut off, their eyes were removed, and pregnant women’s bellies were pierced with bayonets. As a result, eight families were completely destroyed, 25 children lost both parents and 130 children lost one parent.

“The Khojaly tragedy is another terrible example of the policy of occupation, ethnic cleansing and genocide of the Armenian nationalists and their supporters against the Azerbaijani people,” Aliyeva said.

Aliyeva stressed that relevant documents adopted by the parliaments of Mexico, Pakistan, the Czech Republic, Peru, Colombia, Panama, Honduras, Sudan, Guatemala and Djibouti recognized the Khojaly massacre as an act of genocide. The parliaments of Romania, Bosnia and Herzegovina, Serbia, Jordan, Slovenia, Scotland and Paraguay, as well as the executive and legislative bodies of 22 U.S. states have strongly condemned the Khojaly tragedy as a massacre. The Organization of Islamic Cooperation recognized Armenia as an aggressor and the Khojaly tragedy as genocide.

The rights commissioner underlined a special role of the international campaign Justice for Khojaly launched by the Heydar Aliyev Foundation’s Vice-President Leyla Aliyeva in delivering to the world community the facts about the genocide and Armenian atrocities.

The statement noted that as a result of the Azerbaijani army’s counter-offensive operation held on September 27, 2020, to prevent the Armenian aggression against Azerbaijan, to ensure the security of civilians and to end the long-lasting occupation, Azerbaijani territories, which have been under occupation for about 30 years, were liberated. Based on the trilateral declaration signed by the Azerbaijani, Russian and Armenian leaders signed on November 10, 2020, hundreds of thousands of people have been given chance to return to their long-awaited ancestral lands and restore their fundamental rights.