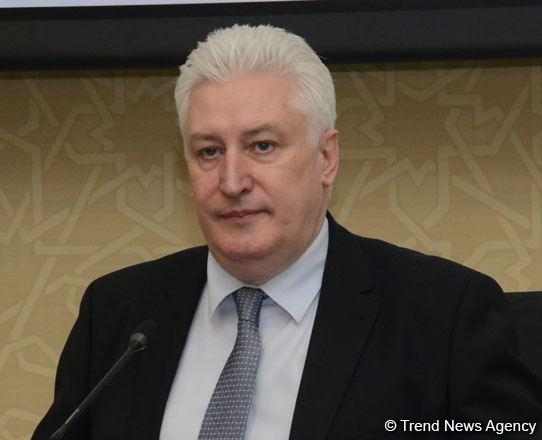 The fact that the Azerbaijani journalists have become victims of Armenian policy while on their duty is very regretful, the editor-in-chief of the Russian National Defense magazine Igor Korotchenko told Vestnik Kavkaza, Trend reports.

Korotchenko made the remark commenting on recent death of the journalists from mine explosion in Kalbajar district liberated from Armenian occupation as a result of the Second Karabakh war (from late Sept. to early Nov.2020).

“I think that international unions of journalists must also express their attitude to this. Perhaps, such an appeal should be made to the Union of Journalists of Russia. Journalists should protect each other, because we are all colleagues by profession. This is a common problem concerning everyone,” he said. “We, the group Russian experts and journalists, when visiting the liberated territories, could become the next victims, because we traveled there along the same roads, and the danger is present everywhere.”

“This problem goes beyond the framework of Armenian-Azerbaijani relations. Appeals on this issue should be made to all organizations, including European ones and international journalistic structures,” the expert also noted.

“This tragedy once again underlines that without Armenia giving Azerbaijan an exact map of minefields, there will always be risks of hitting the mines. It’s necessary to exert international pressure and force Armenia to hand over a map of minefields. This is the only chance to get these maps,” Korotchenko added.

Besides, within the framework of the trilateral statement (between Azerbaijani, Russian presidents and Armenia’s prime minister to end the Second Karabakh war from late Sept. to early Nov.2020), it’s necessary to set up a special high-level group, for example, at the level of deputy defense ministers of Russia, Azerbaijan and Armenia, to consider this issue. Armenia must fulfill this demand, because it is a humanitarian demand,” he concluded.

According to the latest data, on June 4, 2021, at about 11:00 (GTM +4), a car with employees of television channels and news agencies sent to Azerbaijan’s Kalbajar district to carry out their official duties hit an anti-tank mine in the direction of Susuzlug village. As a result, the cameraman of the AzTV channel Siraj Abishov, an employee of the AZERTAC news agency Maharram Ibrahimov, and the deputy representative of the district’s Executive Power in the administrative-territorial district of the village Arif Aliyev were killed. Also, 4 people were injured of varying severity and were hospitalized.