Russian peacekeeper: Armenia behind provocations on border with Azerbaijan 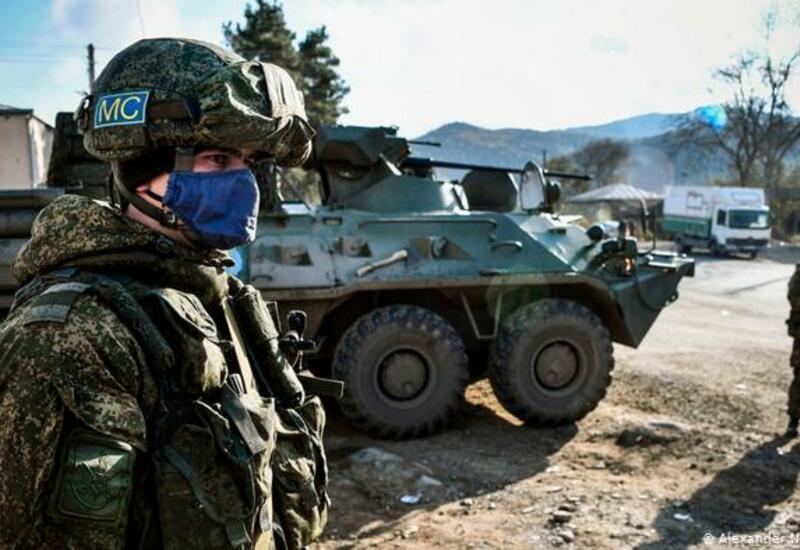 A Russian peacekeeper has said that Armenia is evidently behind the provocations on the border with Azerbaijan, Baku-based local media reported on August 19, quoting the Reverse Side of the Medal Telegram channel.

“Shooting very often takes place on the border of Armenia and Azerbaijan, but this is all just to draw attention to the whole situation and disrupt peace negotiations on the designation of state borders. After analyzing everything that happened, we can say that the provocation on the part of the Armenian armed forces is obvious,” the unidentified Russian peacekeeper said in a note posted on the channel.

It should be noted that the local media shared the screenshots of the note by the Russian soldier, who serves as a member of the Russian peacekeeping contingent temporarily stationed on the Azerbaijani territories liberated from Armenia’s occupation in the 44-day war in 2020.

“I’m serving here at the second shift, that is, I replaced those [Russian servicemen] who entered Karabakh in November 2020. Actually, all this fuss was the result of a big Armenian collapse. Armenia cannot reconcile with its defeat, trying in every possible way to show its importance,” he noted.

As for the mined areas, the Russian peacekeeper stressed that he has never seen such a number of minefields anywhere else.

“Moreover, the Armenian armed forces were retreating so hastily that the documents for the location of many fields weren’t even drawn up. So the humanitarian demining unit every day has to clear the area [of the mines]. Armenians living here previously treated us kindly, even in shops very often they didn’t even take money, but now everything has changed. We are a very good source of income,” he further said.

He added that the living standards in the area is low.

“Taking into account the money and travel allowance ($17 per day), the peacekeepers can afford a lot [buy many goods], and the Armenians make use of this, in places where posts are placed, shops immediately opened. There are also irreconcilable ones who believe that we have betrayed them by not getting involved in the war on the side of Armenia,” the serviceman added.

Later on August 14, President Ilham Aliyev reiterated that Azerbaijan has recently identified that Armenian troops are being sent to Karabakh via the Lachin corridor that is controlled by the Russian peacekeepers.

“Our Defence Ministry made an official statement a few days ago [August 11] to put an end to this. Weapons and servicemen cannot be sent from Armenia to the territories controlled by Russian peacekeeping forces. This contradicts the 10 November trilateral statement. Unfortunately, it continues to this day. We have repeatedly expressed our position verbally. But since it did not work, we officially declared it,” he added.

The head of state noted that Azerbaijan has all technichal means to watch the events taking place in the Lachin corridor and the areas under the Russian peacekeepers’ control.

Commenting on his expectations from Russia, the president said that Azerbaijan wants all the provisions of the trilateral statement to be implemented as it was signed by the Azerbaijani, Russian and Armenian leaders.

“Most of them have already been implemented. But there are some issues that still remain outstanding. This is our expectation. Russia, as a neighbor of Azerbaijan and a close ally of Armenia, certainly plays a special role in this region. This is natural. We hope that Russia continues to spare no effort for the security of the region and take steps to ensure lasting peace,” he said.

Aliyev said that Azerbaijan’s another expectation is that Russia will not arm Armenia.

“We have brought this issue to the attention of Russian officials. We are worried about that. The war is over. The people of Armenia have come to terms with this situation. The Armenian government has also come to terms with its own defeat and the recent parliamentary elections in Armenia showed that. So the people have already given preference to a defeated party. This is an unprecedented sight in history when a defeated party receives popular support. Under such circumstances, of course, it does not make any sense to arm Armenia,” the president said.

He noted although this has not taken place yet, but there have been some statements by Russia.

“A few days ago, during a meeting with the Armenian defence minister, the Russian defence minister said that the process of sending Russian weapons to Armenia had begun. This is a very worrying issue. Also, Armenia’s new minister of defence made very irresponsible statements that if the Azerbaijani side trespassed the Armenian border by one centimeter, then they would open fire. In other words, it seems that the second Karabakh war has not been a lesson for everyone yet. If this is the case, then we are ready to teach them another lesson. Therefore, we hope that Russia does not arm Armenia because there is no need for that,” he added.

Aliyev said that Azerbaijan wants Russia to take into account Baku’s concerns in this matter.

“Because no matter how many weapons are given, the balance of powers will not change. Over the past 30 years, Russia provided Armenia with billions of dollars worth of free weapons – some of which are now on display in our Military Trophy Park– but the Armenian army has been completely dismantled. We will allocate as much money as we need to arm our army, and we did that. We simply think that the war is over and there is no need for that. We were not and are not the ones who initiated the process of rearmament of the region. We hope that other partners take appropriate steps,” he added.

To recap, the past few weeks have seen the worst escalation of tension between Armenia and Azerbaijan since the signing of the November 10 statement that ended the last year’s hostilities between the two countries.

The presence of any Armenian serviceman on Azerbaijan’s internationally-recognized territories is in violation of the November peace deal signed by Baku, Moscow and Yerevan.

About 2,000 Russian peacekeepers have been deployed for five years in Karabakh under the Moscow-brokered trilateral cease-fire deal. The signed agreement obliged Armenia to withdraw all its troops from the Azerbaijani lands that it had occupied since the early 1990s.

The deal also stipulated the return of Azerbaijan’s Kalbajar, Aghdam and Lachin regions. Before the signing of the peace deal, Azerbaijan liberated 300 villages, settlements, city centres, and historic Shusha city that had been under Armenian occupation for about 30 years.

Previous Azerbaijan, Latvia look to expand co-op on postal and financial services
Next No vaccinated citizens died from COVID-19 in Azerbaijan – TABIB