Flowers and their history are very mysterious and thrilling. Different legends and often-true stories encompass this natural beauties.

There are thousands and may be millions kinds of flowers around the world but only some of them have become popular by chance.

In the late 1800s, the idea that flowers represented feelings grew into a system of communicating through flower arrangements. Codebooks guided those who wanted to compose or read floral messages. From the origin of a flower’s name to its distinctive characteristics and rich mythology, flowers are infused with symbolism and meaning.

The expression feelings and emotions with the help of these flowers has not been forgotten. For example, giving an even number of flowers is appropriate for sad events.

Azerbaijan, in turn, is famous for its love of flowers. Perhaps, Azerbaijani women are those lucky who never left without big exquisite bouquets.

Certain flowers gifted in Azerbaijan are the most popular and, to be honest, my favorite. Roses are associated with beauty and perfection, a time-honored way to say “I love you.” Whether it’s for a birthday, Valentine’s Day for no occasion at all, you will not find a better way to express your deep feelings that with a rose. Throughout its long, storied history, the red rose still reigns as the ultimate symbol of passionate affection. The quantity can also have a special meaning. For example, a single rose shows love while a dozen shows gratitude, twenty-five congratulations and fifty – unconditional love. Two red roses tied together symbolize an engagement.

The shade of the color has a special meaning as well. Bright red means love, burgundy means unconscious love, dark crimson is used to show mourning. A withered red rose is used to show that the love is over. A red rosebud symbolizes youthful love and beauty.

Tulips were brought to Europe in the 16th century from Persia and Turkey, where they got their common name from the Turkish word for gauze, reflecting the turban-like appearance in full bloom. By the 17th century, the popularity of these charming flowers, particularly in the Netherlands, became so great that “tulip mania” swept through countries.

Although different tulip colors carry distinct meanings, a famous Turkish legend is more likely to be responsible for the red tulip’s symbolism. The story tells of a prince named Farhad who was in love with maiden named Shirin. When Farhad learned about Shirin’s death, he was so overcome with grief that he took his own life, riding his horse over the edge of a cliff. Legend has it that a scarlet tulip sprang up from every droplet of his blood, giving the red tulip the meaning of a “perfect love.”

So it is no surprise that the red tulip symbolizes love and romance, but there are lots of other colors the tulips bloom in and each one has a different meaning. 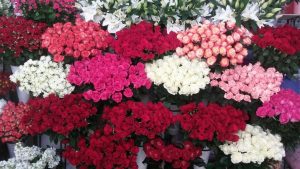 The stunning orchid is an abundant species of flowering plant and is arguably one of the most common flowers throughout the world. These flowers have had a long history and have different meanings. In ancient Greece, it was believed that orchids were a symbol of fertility and virility.

Today, orchids are a symbol of love and affection. It has an amazing ability to grow anywhere and has the resistance power to bloom under any condition. A pink orchid conveys pure affection while the Cattleya orchid denotes mature charm, and is often used in corsages for Mother’s Day.

The traditional symbol of China, the state flower of Indiana, and the 12th wedding anniversary flower, peonies are also known as the flower of riches and honor. Their full, rounded bloom symbolizes romance and promises a happy marriage.

Other meanings for the peony flower are compassion, bashfulness and shame. Some legends say that nymphs, who were too shy and bashful to show themselves to humans, tended to hide on the petals of the peonies.

Flowers mean different things in different cultures. However, one thing does not change – they are loved everywhere. Presented as a gift or to decorate a party, flowers are terrific always.