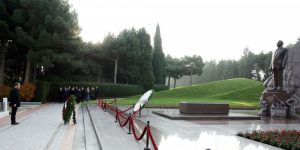 A delegation led by the Serbian Deputy PM, Minister of Trade, Tourism and Telecommunications Rasim Ljajić has visited the Alley of Honors to lay a wreath at the tomb of national leader, founder and architect of modern Azerbaijani state Heydar Aliyev.

The delegation then visited the Alley of Martyrs to commemorate Azerbaijani heroes who gave their lives for the country`s independence and territorial integrity. Deputy PM Rasim Ljajić put a wreath at the Eternal Flame memorial.