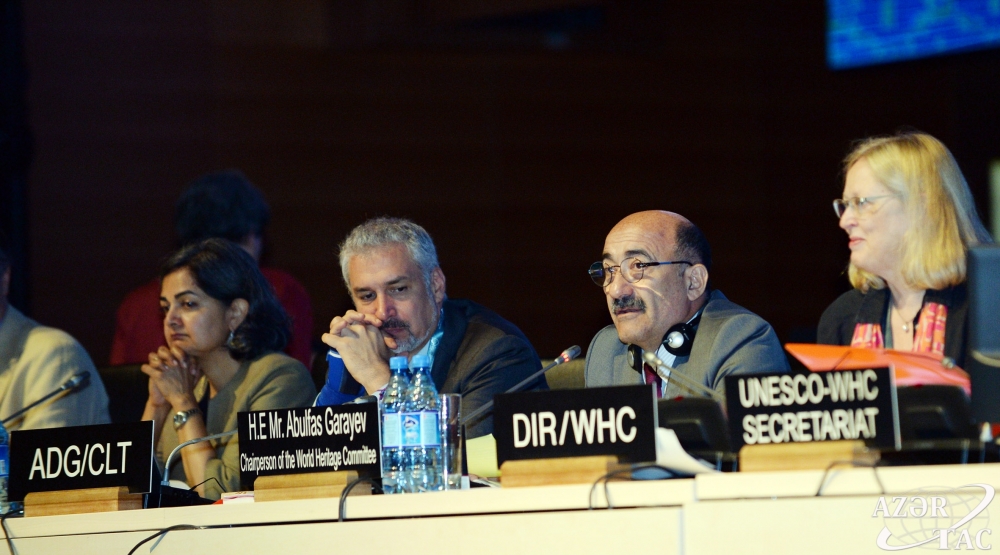 During the morning session of its current meeting, in Baku, the World Heritage Committee inscribed seven cultural sites on UNESCO’s World Heritage List. The sites added to the List are situated in Australia, Bahrain, China, India, Indonesia, Japan and People’s Democratic Republic of Lao. Inscriptions will continue through 7 July.

New sites, by order of inscription:

Dilmun Burial Mounds (Bahrain) — The Dilmun Burial Mounds, built between 2050 and 1750 BCE, span over 21 archaeological sites in the western part of the island. Six of these sites are burial mound fields consisting of a few dozen to several thousand tumuli. In all there are about 11,774 burial mounds, originally in the form of cylindrical low towers. The other 15 sites include 17 royal mounds, constructed as two-storeyed sepulchral towers. The burial mounds are evidence of the Early Dilmun civilization, around the 2nd millennium BCE, during which Bahrain became a trade hub, whose prosperity enabled the inhabitants to develop an elaborate burial tradition applicable to the entire population. These tombs illustrate globally unique characteristics, not only in terms of their number, density and scale, but also in terms of details such as burial chambers equipped with alcoves.

Budj Bim Cultural Landscape (Australia) — Located within the Country of the Gunditjmara, an Aboriginal nation in the southwest of Australia, the property includes the Budj Bim Volcano and Tae Rak (Lake Condah), as well as the Kurtonitj component, characterized by wetland swamps, and Tyrendarra in the south, an area of rocky ridges and large marshes. The Budj Bim lava flows, which connect these three components, have enabled the Gunditjmara to develop one of the largest and oldest aquaculture networks in the world. Composed of channels, dams and weirs, they are used to contain floodwaters and create basins to trap, store and harvest the kooyang eel (Anguilla australis), which has provided the population with an economic and social base for six millennia.

Archaeological Ruins of Liangzhu City (China) — Located in the Yangtze River Basin on the south-eastern coast of the country, the archaeological ruins of Liangzhu (about 3300-2300 BCE) reveal an early regional state with a unified belief system based on rice cultivation in Late Neolithic China. The property is composed of four areas – the Area of Yaoshan Site, the Area of High-dam at the Mouth of the Valley, the Area of Low-dam on the Plain and the Area of City Site. These ruins are an outstanding example of early urban civilization expressed in earthen monuments, urban planning, a water conservation system and a social hierarchy expressed in differentiated burials in cemeteries within the property.

Jaipur City, Rajasthan (India) — The fortified city of Jaipur, in India’s northwestern state of Rajasthan was founded in 1727 by Sawai Jai Singh II. Unlike other cities in the region located in hilly terrain, Jaipur was established on the plain and built according to a grid plan interpreted in the light of Vedic architecture. The streets feature continuous colonnaded businesses that intersect in the centre, creating large public squares called chaupars. Markets, stalls, residences and temples built along the main streets have uniform facades. The city’s urban planning shows an exchange of ideas from ancient Hindu and modern Mughal as well as Western cultures. The grid plan is a model that prevails in the West, while the organization of the different districts refers to traditional Hindu concepts. Designed to be a commercial capital, the city has maintained its local commercial, artisanal and cooperative traditions to this day.

Ombilin Coal Mining Heritage of Sawahlunto, (Indonesia) — Built for the extraction, processing and transport of high-quality coal in an inaccessible region of Sumatra, this industrial site was developed by the Netherlands’ colonial government from the late 19thto the beginning of the 20th century with a workforce recruited from the local population and supplemented by convict labour from Dutch-controlled areas. It comprises the mining site and company town, coal storage facilities at the port of Emmahaven and the railway network linking the mines to the coastal facilities. The The Ombilin Coal Mining Heritage was built as an integrated system that enabled the efficient deep-bore extraction, processing, transport and shipment of coal.

Mozu-Furuichi Kofun Group: Mounded Tombs of Ancient Japan (Japan) — Located on a plateau above the Osaka Plain, this property includes 49 kofun (old mounds in Japanese). Burial mounds of various sizes, kofun can take the form of key holes, scallops, squares or circles. These tombs were for members of the elite, containing a range of funerary objects (such as weapons, armour and ornaments). They were decorated with clay figures, known as haniwa, which can take the form of cylinders or representations of houses, tools, weapons and human silhouettes. These kofun have been selected from a total of 160,000 in Japan and form the richest material representation of the Kofun period, from the 3rd to the 6th century CE. They demonstrate the differences in social classes of that period and reflect a highly sophisticated funerary system.

Megalithic Jar Sites in Xiengkhouang — Plain of Jars (Lao People’s Democratic Republic) — The Plain of Jars, located on a plateau in central Laos, gets its name from more than 2,100 tubular-shaped megalithic stone jars used for funerary practices in the Iron Age. This serial site of 15 components contains large carved stone jars, stone discs, secondary burials, tombstones, quarries and funerary objects dating from 500 BCE to 500 CE. The jars and associated elements are the most prominent evidence of the Iron Age civilization that made and used them until it disappeared, around 500 CE.

Previous Azerbaijani FM: The mediation efforts by the OSCE unfortunately, have still not yielded results
Next Inspection date of uncoordinated parts of the Georgian-Azerbaijani border revealed