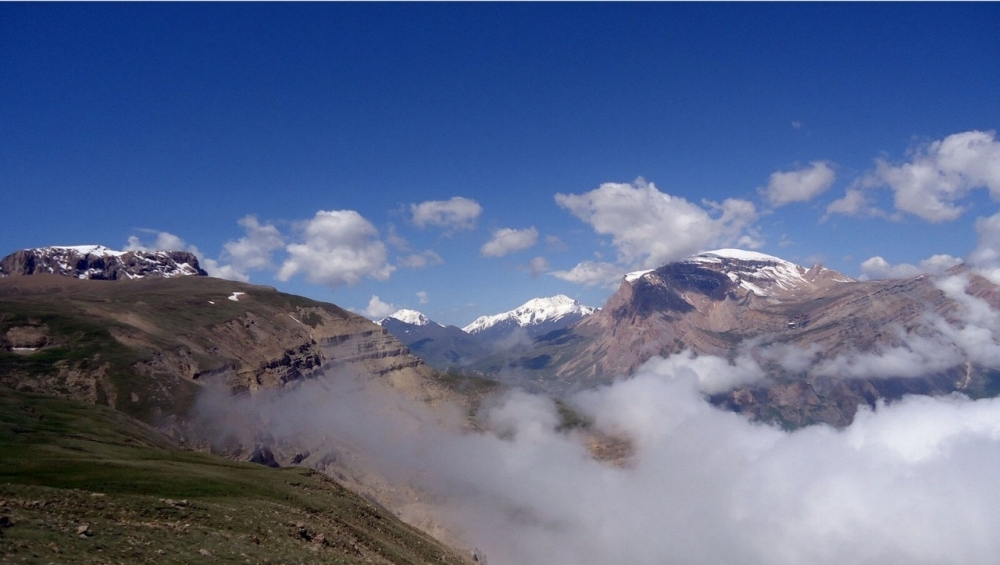 The Shahdagh National Park, formed in 2006 on the expanses of the Greater Caucasus mountain range, includes the territories of the Ismayilli and Pirgulu reserves, as well as partly high-alpine forested and meadow territories of Ismayilli, Guba, Gusar, Gabala, Oghuz and Shamakhi districts. The total area of the park is 130,508.1 hectares. Thus, the Shahdagh National Park can claim to be the largest nature conservation area of Azerbaijan.

The location of the park is quite remarkable, since it is located in the border zone of Azerbaijan, Georgia and Russia. Many experienced tourists are inclined to believe that the nature of the Shahdagh National Park is one of the most beautiful in Azerbaijan. It is this national park that included the most powerful mountain peaks of Azerbaijan: Mount Kurvedagh, rising to 3,863 meters above sea level, Mount Bazaryurd, reaching a height of 4,126 meters, and Mount Bazarduzu, whose height is 4,466 meters. Mount Bazarduzu, which is located at the very border of Azerbaijan and Dagestan, is often called the most southerly point of Russia, however, this is an erroneous statement. The southernmost point of Russia (Dagestan) is located about 4 kilometers south of this peak. But on the territory of Azerbaijan, Mount Bazarduzu is recognized as the highest. Not long ago there were as many as 8 large glaciers on the mountain, the largest of which reached about a kilometer in length.

It is noteworthy that the name of the mountain Bazarduzu in Azerbaijani means “market square”. And this name is fully justified by the history of the region. The thing is that in the old days just east of the mountain peak, large fairs were held annually in the territory of the Shahnabad valley. Thus, Mount Bazarduzu was an excellent reference point for many traders and visitors to fairs.

Among all the massifs, the most unique is the Shahdagh mountain range, the top of which reaches 4,243 meters above sea level. This mountain has, as it were, several “floors”, represented by gentle terraces along with rocky outcrops or simply with ridges. The abundance of “steps” and granite formations make Mount Shahdag look like a modernist architectural structure. On one of the mountain terraces, tourists like to stay on vacation. People are attracted by a waterfall of almost 50 m in height. In addition to water and green carpets, stones are scattered everywhere, and the surrounding landscape is often buried in clouds of mist.

The riches of the Shahdagh National Park include 271 species of vertebrate animals, of which 108 species are included in the Red Book of Azerbaijan. Among the rare mammals in the park, there is an East Caucasian (Dagestan) tour, red deer, chamois, brown bear, common lynx, otter, bats (lesser horseshoe and long-eared bat), marten, badger, forest cat, reed cat and others. Among the birds, we can mention the Caucasian black grouse, black storks and white storks, grave eagles, red heron, goshawk, golden eagle and others.

The majestic and seemingly inaccessible Mount Shahdagh can be conquered. To do this, you need to get to the Suvar mountain tourist complex by cars, and then start climbing. To get to the top will take 3 days. You can climb there by two paths. These are the northern and southern routes developed by climbers. Despite the difficult ascent, all the way you will enjoy clean air, stunning landscapes interspersed with high-mountain lakes, picturesque canyons and pristine silence. In addition, you will see ancient bridges, caravan routes and other historical monuments that have reached our days.

The southern road leading to this peak of Azerbaijan is easier and does not require any special climbing equipment. In 1892, this route was developed by Russian topographer and researcher of the Caucasus Andrey Pastukhov, the first compiler of the map of this mountain range.

Mostly mountain slopes are covered with grassy vegetation with a large variety of flowering plants. In the park you can find whole fields of poppies, blooming in May.

The Yatagdere River, located between Bazaryurd and Bazarduzu, adds to the picturesqueness of the region. In general, a lot of water flows through the park, many of them are tributaries of the Shahnabat River.