At the crossroads of Europe and Asia, bordered by the Caspian Sea and the Caucasus Mountains, it was an important thoroughfare on the Silk Road, the ancient web of trade routes linking East and West.

By the 19th century, Sheki, on the Silk Road path through northwest Azerbaijan, was an international center for silk production. Today, it’s one of Azerbaijan’s most picturesque towns, filled with cobbled streets and medieval architecture: a fresh, bucolic retreat from the more arid south. 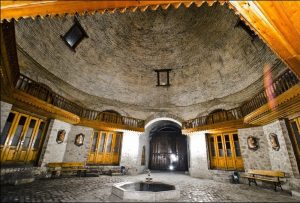 Sheki’s top tourist attraction is the summer palace of the Sheki Khans.

“Built in the late 18th century, this two-story building has a breathtakingly ornate interior and exterior. Russian wood, French stained glass, Ottoman ceramics and Iranian mirrorwork all went into the construction of this pleasingly picture-perfect and symmetrical masterpiece.”

The facade is covered in large part by a mosaic of multicolored glass set in a wooden lattice, called a shebeke, constructed without nails or glue. Examples of shebeke artistry can be found throughout Sheki.