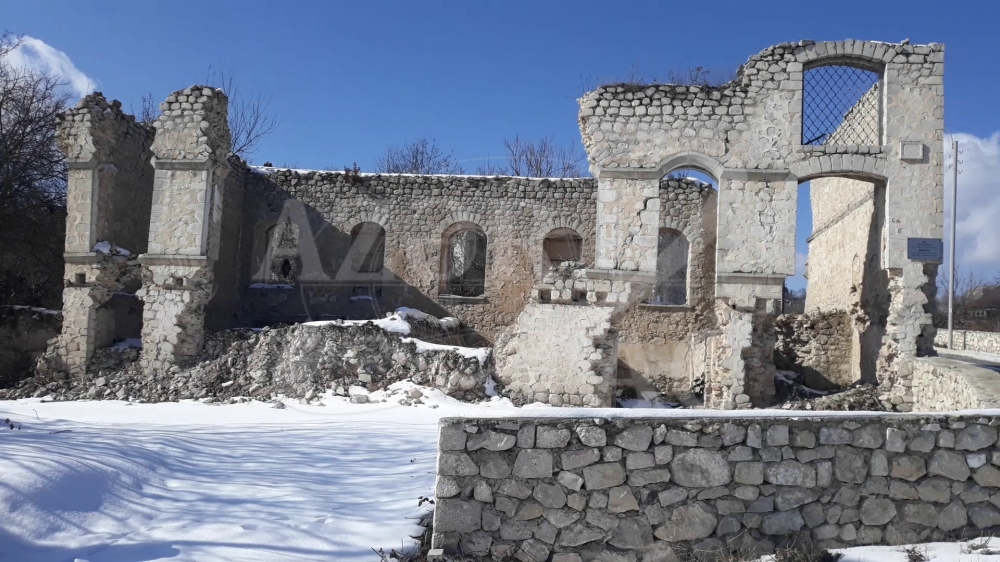 Shusha – the pearl of Karabakh, which was liberated from Armenia’s decades-long illegal occupation on November 8, 2020, and declared as the “Cultural Capital of Azerbaijan” by Azerbaijani President Ilham Aliyev, has always been distinguished by its unique urban planning architecture.

All the neighborhoods in the city belonged to the Azerbaijani people who built it. There were baths, mosques and springs in each neighborhood.

Chukhur was one of the lower neighborhoods built in Shusha in the 18th century.

Chukhur Mahalla mosque was an Azerbaijani mosque located in the neighborhood bearing the same name.

The mosque is located in the eastern part of Shusha in the Chukhur neighborhood. Chukhur Mahalla Mosque was one of seventeen mosques built in Shusha at the end of the 18th century. The mosque had two minarets.

The Estate of Haji Gulu is also located in this neighborhood. The three-story building, like all luxurious mansions, reflects the national architectural style in both exterior and interior. The mansion was built in 1849 by Gulu Mahammadali oglu who was one of the famous merchants of Shusha.

The neighborhood is also home to the house-museum of People’s Artist Bulbul, who made a great contribution to the development of Azerbaijani music culture and played an important role in the formation and evolution of the professional vocal school.

The house-museum, which was opened in the city of Shusha after restoration in August 2021, with the participation of President Ilham Aliyev and First Lady Mehriban Aliyeva, was another manifestation of Azerbaijan’s strong commitment to preserve its rich cultural heritage and properly pass the following generations.

Like most other historical architectural monuments in Shusha, Chukhur neighborhood was also subjected to Armenian vandalism. Thus, Armenians destroyed the 18th-century mosque and a number of other historic buildings in the neighborhood.