Speaker of Milli Majlis meets with Romanian Ambassador to Azerbaijan 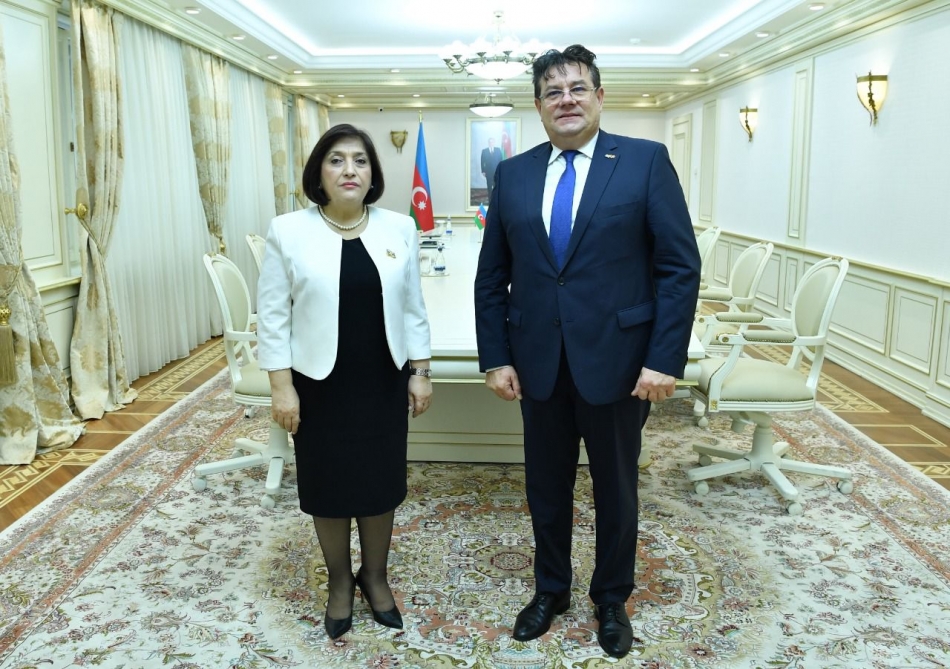 Speaker of Azerbaijani Milli Majlis Sahiba Gafarova has met with Ambassador of Romania to the country Vasile Soare.

Speaker Sahiba Gafarova wished the Ambassador success in his diplomatic tenure in Azerbaijan.

The Parliament Speaker recalled that Romania was the second country in the world and the first of the EU members to recognize the independence of Azerbaijan, adding that the bilateral relations had since evolved to strategic partnership that encompasses politics, culture, humanitarian affairs, economics and other areas. “Reciprocal visits of the two states’ leaders and the existing treaty framework of the co-operation inject dynamism in our relations,” Gafarova said.

“The high-status relationship bears well on the cooperation between the Azerbaijani and Romanian parliaments, too; both have the successful two-way friendship groups in action. Moreover, our legislatures cooperate fruitfully in the international organizations,” Gafarova pointed out.

“Highlighting the new situation established in the region following the brilliant victory in the Patriotic war won under the leadership of victorious Commander-in-Chief President Ilham Aliyev, Speaker Gafarova mentioned that the Azerbaijani state was now busy restoring and rebuilding its towns and provinces that the Armenian side had razed to the ground during the occupation. The Romanian ambassador was also informed of the ongoing demining work in those areas, the deaths of military personnel and civilians alike in the explosions of the Armenian-planted mines, Azerbaijan’s endeavours to ensure peace and security in the region, and other matters. “Azerbaijan is a multi-confessional and multicultural country, a peace advocate – a country that wants constant peace in the region as well as in the whole world,” the Speaker noted.

Ambassador Vasile Soare thanked for the warm welcome and expressed his pleasure with the forthcoming diplomatic mission in Azerbaijan. “Azerbaijan is a link between the East and the West; Romania finds the furtherance of the relations with Azerbaijan to be of great importance,” he said.

The Romanian diplomat pointed to the friendship ties between Azerbaijan and Romania, adding that he would do his utmost to ascertain a continued progress of the relations in various areas.