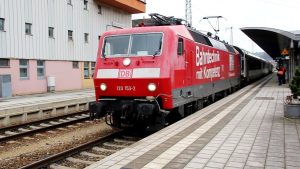 The Azerbaijan Railways Closed Joint Stock Company CJSC said that passenger cars are currently being tested for all parameters in the section between Donauworth and Treuchtlingen stations in Germany.

Tests are conducted by the railways of Germany on a 35-km stretch.

During testing, the maximum speed of the cars was increased to 177 km/h. The tests are carried out with the participation of delegations from ARW and Stadler Rail Group.

Azerbaijani President Ilham Aliyev expressed Azerbaijan’s readiness to participate in this project during his official visit to Georgia on June 14, 2004.

So, the Declaration on the Baku-Tbilisi-Kars railway project between Azerbaijan, Georgia and Turkey was signed at the opening ceremony of the Azerbaijani part of the main export pipeline Baku-Tbilisi-Ceyhan on May 25, 2005.

The logical conclusion of the project negotiations was the signing of the agreement on the beginning of the Baku-Tbilisi-Kars railway construction during the Ilham Aliyev’s working visit to Georgia on February 7, 2007.

The construction of the Georgian section within the Baku-Tbilisi-Kars railway started on November 21, 2007 and in Turkish – on July 24, 2008.

Azerbaijan issued a loan to Georgia for $ 775 million with a minimum interest rate.

The solemn ceremony was held to mark the opening of the Baku-Tbilisi-Kars railway on October 30, 2017 at the Baku International Sea Trade Port, designed to connect not only the three countries, but also entire continents.

According to the State Oil Fund, for the implementation of the Baku-Tbilisi-Kars railway project, $ 640.3 million has been allocated by September 30, 2017.

The Istanbul Declaration was signed 29 October 2018 within the 7th trilateral meeting of Azerbaijani, Georgian and Turkish foreign ministers. Declaration stated that commissioning of the Baku-Tbilisi-Kars railway would make a great contribution to the economic development of the three countries and facilitate competitive transportation between Asia and Europe and in Caspian Sea. The parties agreed to all the necessary support for increasing the volume of passenger and cargo transportation from the Trans-Caspian East-West Corridor through the BTK railway.

Azerbaijan Railways Closed Joint Stock Company told Trend that the organization of passenger transportation on the Baku-Tbilisi-Kars route is planned for the third quarter of 2019.

In fact, the BTK railway route is the shortest way to deliver cargo from the Russian regions located in the Volga, Ural and Siberian Federal Districts to the Mediterranean ports of Turkey, and further to the countries of Africa and the Middle East.

At present, the BTK provides transportation from Kazakhstan to Mersin port. Some cargoes are delivered from Russia to Turkey and Europe.

The BTK railway has been constructed on the basis a Georgian-Azerbaijani-Turkish intergovernmental agreement. The project implementation began in 2007 and construction began in 2008. The line is intended to transport one million passengers and 6.5 million tons of freight at the first stage. This capacity will then reach 3 million passengers and 17 million tons of cargo.