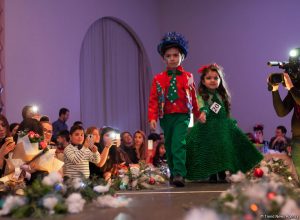 According to the designers, kids clothing should be made from natural and environmentally friendly materials that do not cause allergies.

In winter, the wardrobe should be filled with warm and soft outfits. In hot summer days, it is best to pick up clothes from cotton, linen, staples, calico, fine knitwear.

The host of the evening was TV presenter Seyran Babayev.

The winners were awarded with diplomas and valuable prizes.

Among boys, Jabir Hasanov and his fashion designer Aysel Davudgizi won the first place at the fashion show. Kerim Kerimzade and  fashion designer Nazrin Huseynova were second, while Adnan Kerimli and Sarah Guliyeva were third.