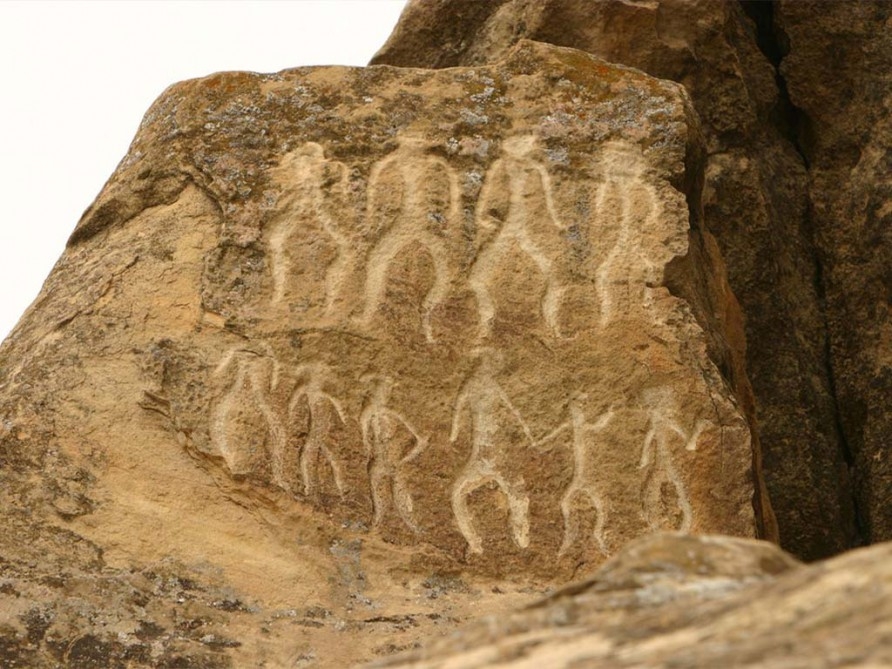 In Azerbaijan there are two wonderful regions called Gobustan, equally attractive for tourists. One of them, Gobustan district with the center in the old city of Maraza. And the second is the Gobustan Reserve, known throughout the world by the petroglyphs discovered there. Each of these locations is distinguished by its unique sights and deserves a separate story. We have tried to collect for you only the basic facts about the two Azerbaijani Gobustans.

Gobustan – the border of ancient Shirvan

At the 90th kilometer of the way from Baku to Shamakhi there is one of the regions most closely located to the capital – Gobustan region. The administrative center of the district is the ancient city of Maraza, renamed Gobustan since 2008. In the recent past, Maraza was part of the Shamakhi region until the Gobustan region was created in 1990.

It is from this mountainous area that the lands of the ancient Shirvan begin, in which from the VIII to the XVI-th centuries the powerful state of the Shirvanshahs existed with its capital in the city of Shamakhi. The word “Gobu” in Azeri means “beam”. In this toponym is reflected the terrain – beams, ravines, rocky gorges. In the spring, everything is covered with greenery – poppies, chamomiles, irises blossom.

The area has preserved many natural and historical monuments. The most original and attractive object for tourists are cave labyrinths – “Kur”, located near the city, in the gorge in the village of Syunlyu. Labyrinths are a system of natural galleries and grottoes, artificially expanded and adapted for housing in the Middle Ages, when civil wars and foreign invaders took place in Azerbaijan.

In addition, in the vicinity of the city there is a mineral spring with bitter-salty water, which is useful in treating a number of gastrointestinal diseases.

In these parts since ancient times were engaged in carpet weaving. Patterns of local carpets are known all over the world under the names «Maraza», «Chukhanly», «Dzhemgemli». And the «Nabur» carpets are still woven by hand in the village of the same name.

The administrative center of Gobustan district is a very picturesque town, which undoubtedly deserves attention.

Gobustan State Historical-Artistic Reserve, located even closer to Baku – 60 km to the south, on the territory of Garadagh and Absheron districts.

On the territory of the reserve with a total area of 537 hectares, one of the world’s largest collections of ancient cave paintings is concentrated – there are more than 6,000 thousand petroglyphs. This unique monument of global scale was included in the UNESCO World Heritage List in 2007. In Gobustan State Historical-Artistic Reserve, you can also see the sites of ancient people, the remains of a large prehistoric cromlech and other evidence of the inhabitants of the region of the Stone Age and subsequent periods.

The Gobustan petroglyphs were repeatedly researched by the famous Norwegian scientist and traveller Thor Heyerdahl, who considered the rock paintings of the boats here, the oldest known in the world of ship images. These ships, similar to the ancient Scandinavian ships, prompted him to put forward a sensational hypothesis about the likely Kinship between the Norwegians and Azerbaijanis. Thor Heyerdahl came to the conclusion that the ancestors of the Scandinavians are immigrants from the territory of Azerbaijan.

The subject of interest of tourists is also a stone slab with a Latin inscription dating from the 1st century, left by the XII Roman legion of Emperor Domitian, which testifies to the presence of this legion here.

As a rule, the tour to Gobustan begins with a visit to the magnificent interactive museum, located here, after which guests can stroll through the territory of the reserve.

The triumph of high technology

The museum of Gobustan State Historical-Artistic Reserve opened in 2011 after a thorough reconstruction. Today it is a modern interactive museum complex, in which more than 100 thousand archaeological materials are collected.

Petroglyphs resembling the Azerbaijani Yalli round dance meet visitors at the entrance. In the information center of the museum, visitors can use the touchscreen display to get detailed information in various languages about the reserve and the museum structure, which is divided into thematic sections.

The exhibition part of the museum includes several rooms: “Gobustan: UNESCO World Cultural Heritage”, “Gobustan Natural Environment”, “Time Travel”, “Archaeological Discoveries in Gobustan”, “Life of People of the Ancient”, “Art of the Ancient Period”, “Meaning of the petroglyphs “,” Artists of the ancient Gobustan”, “Petroglyphs from time immemorial”, “Beasts and Hunters”, “Cultural landscape of Gobustan rock art”. Already one their enumeration gives an idea of how diverse the exposition of the museum.

Many unique artifacts, tools relating to the Paleolithic, Mesolithic and Neolithic, animated presentations, video materials allow tourists to see the extent of the natural changes that took place in Gobustan, the geography of human settlements, to get acquainted with the culture and views of ancient people.

The museum also has a cinema with 45 seats, where you can make a virtual flight in 3D format over the territory of the reserve. At the disposal of visitors are interactive stands, educational and entertainment games, a library. You can also climb to the observation deck area of 283 square meters, where there are two telescopes.

The complex has a meeting room, where there are all conditions for holding various conferences, events of local and international importance, as well as a photographic laboratory and a research department.

In a word, no one will be bored in the museum. The day spent in Gobustan will be remembered by visitors for a long time and will allow to enrich the knowledge of everyone who is interested in natural science.