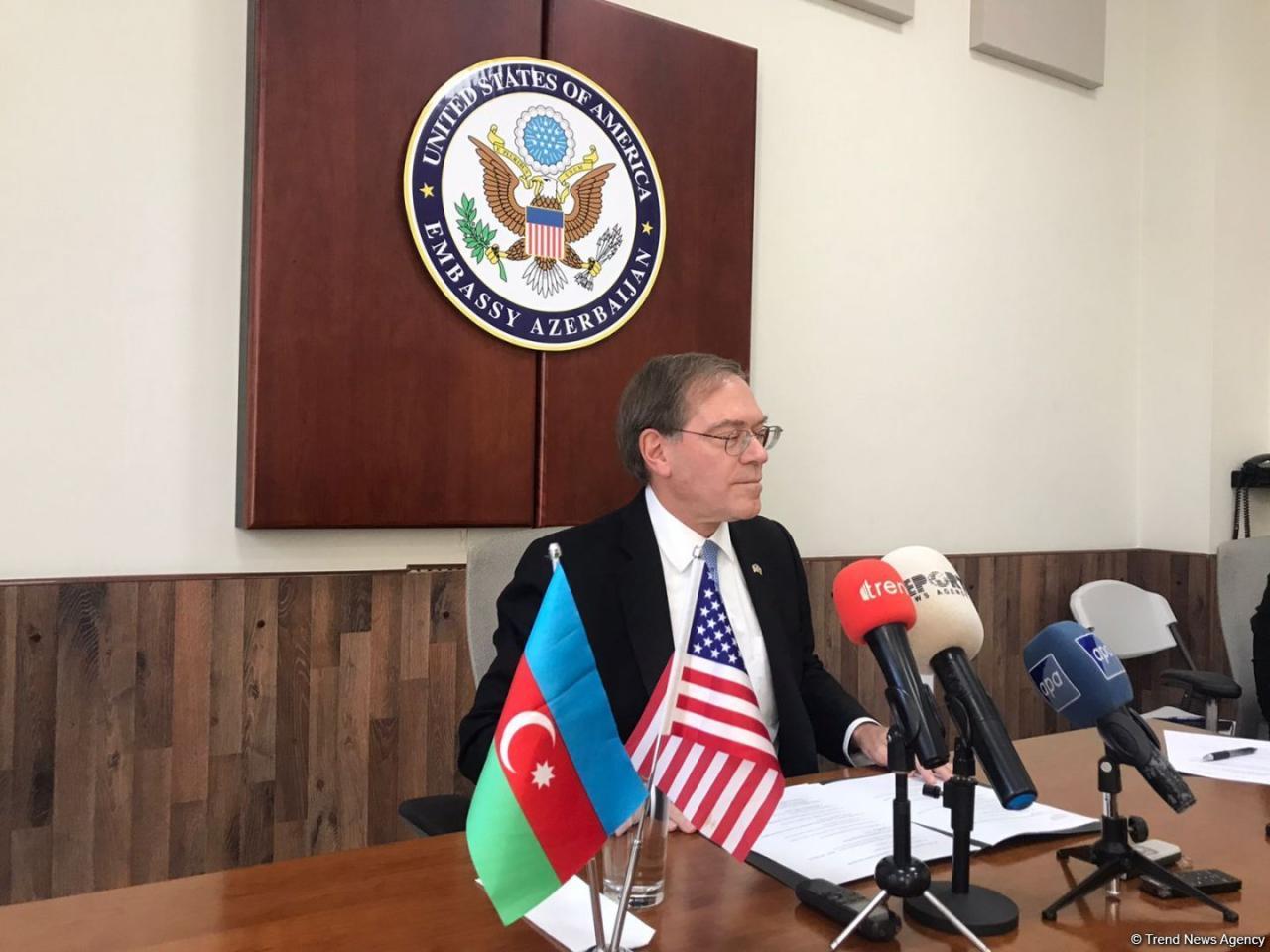 Litzenberger made the remarks at a press conference with local journalists on February 16.

The diplomat noted the importance of the Southern Gas Corridor in ensuring Europe’s energy security.

“Last week I highlighted the incredibly important role of the Southern Gas Corridor. The US’ sustained support for that project was a part of our goal to improve European energy security, reduce Europe’s dependence on coal and diversify gas supplies to Europe. We greatly value the strategic role that Azerbaijan has played in that process,” he stressed.

The ambassador described Azerbaijan as a reliable supplier of energy resources and strategic partner in ensuring Europe’s energy security.

“Azerbaijan has proved itself to be a reliable, dependable energy supplier. We started with the Contract of the Century building the Baku-Tbilisi-Ceyhan oil pipeline, we have moved beyond that to help develop Azerbaijan’s gas resources, build the Southern Gas Corridor, which is now bringing Azerbaijani gas to Italy, Georgia, Greece, Turkey, potentially to Western Balkans. It plays a strategically important role,” the ambassador emphasized.

Noting the importance of the diversification of energy sources, Litzenberger said that the Southern Gas Corridor can play a significant role in this process.

He underlined that the Trans-Caspian Pipeline, as well as the Southern Gas Corridor, can be important in delivering Turkmenistan’s gas resources to global markets and Europe.

“The Trans-Caspian Pipeline is also a way to potentially unlock Turkmenistan’s significant and tremendous gas resources and bring them to global markets and bring them to Europe. We have always believed that the importance of the Southern Gas Corridor is that it can be expanded and carry additional gas to Europe. We are open to all opportunities to increase the gas supply to Europe. Most of them come from Azerbaijan. That’s good for Azerbaijan, for Europe and the U.S,” Litzenberger said.

The Southern Gas Corridor can also play a big role in the post-hydrocarbon period, he added.

“Azerbaijani gas can help the Balkans switch to clean energy. The Southern Gas Corridor can also transport hydrogen and thus, also play a big role in the post-hydrocarbon period,” the diplomat stressed.

The 8th ministerial meeting of the Southern Gas Corridor Advisory Council, held in Baku on February 4, reaffirmed Azerbaijan and the European Union’s strategic energy partnership, which is based on shared goals for long-term energy security, supply security, and green energy transition.

Azerbaijan prioritizes equal and mutually beneficial cooperation with the European Union. In 2021, Azerbaijan and the EU will have a trade turnover of $15.2 billion. At the same time, from 2012 to 2021, the EU invested more than $21.5 billion in Azerbaijan’s economy.

As part of its economic investment plan, the European Union (EU) has provided Azerbaijan with a €2 billion financial package. Furthermore, the EU stated its readiness to participate in Azerbaijan’s restoration and reconstruction efforts.

The talks between Azerbaijan and the EU on a new agreement, which will serve as the legal framework for relations, are nearing completion.

In February 2008, the European Commission Delegation to Azerbaijan was established in Baku.

Previous Co-chairs of Azerbaijan-Russia Intergovernmental Commission on Economic Cooperation meet via videoconferencing
Next KarabakhSpace.eu: It is time to reveal the fate of missing persons from the first Karabakh War