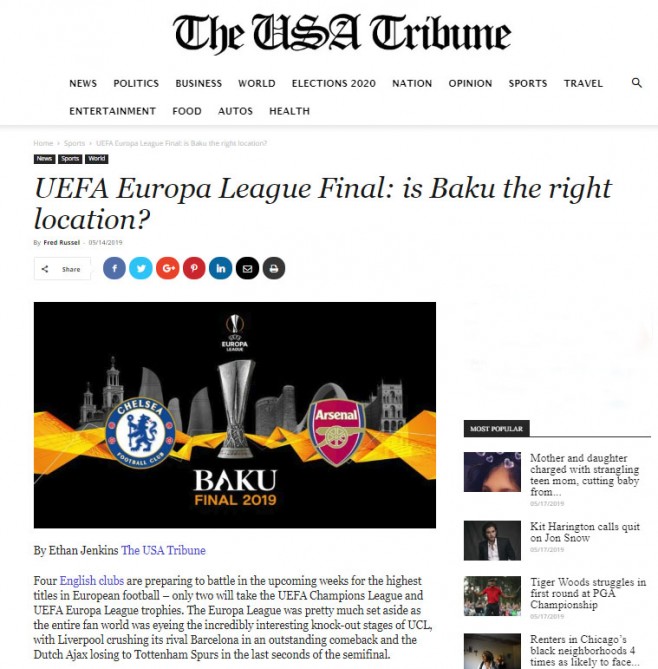 Four English clubs are preparing to battle in the upcoming weeks for the highest titles in European football – only two will take the UEFA Champions League and UEFA Europa League trophies. The Europa League was pretty much set aside as the entire fan world was eyeing the incredibly interesting knock-out stages of UCL, with Liverpool crushing its rival Barcelona in an outstanding comeback and the Dutch Ajax losing to Tottenham Spurs in the last seconds of the semifinal.

That until now, when the venue for the Europa League final became a subject of endless debates. Major media outlets with scores of sports commentators have taken upon themselves to analyze the reasons behind the decision to award the honor to Baku, the capital of Azerbaijan. Whether the decision was correct or not, will be known in less than three weeks. The reasons for lambasting that decision, however, have no merit.

Baku, the capital of Republic of Azerbaijan which borders Russia to the north, Iran to the south, Georgia and Armenia to the west, is located on the shore of the Caspian Sea. With a population of roughly 4.7 million in the city and surrounding suburbs, Baku is recognized as a booming industrial metropolis which saw a rapid economic development in the last decade. The city lies on the ground with valuable treasure underneath. Onshore oil fields make up a vast amount of territory in and around Baku, and one of the world’s biggest offshore oil fields lies just off the coast of Absheron peninsula where the capital of the country is located. In 1994, the leadership signed the so-called “Contract of the Century”, giving huge incentives to Western European energy companies to invest in the oil and gas infrastructure and ship the valuable commodity to the West. As the petrodollars began pouring in after 2006, the government began expending on infrastructure, social programs, military, sports and even its own satellites.

The government and various government-funded organizations spent millions in building numerous sports and entertainment venues in an effort to draw international sports competitions to Azerbaijan, boost tourism and improve its own athletic standings by development of youth programs. So far, Azerbaijan successfully hosted several international tournaments, including the 2015 Chess World Cup, 2018 World Judo Championship, 2017 Islamic Solidarity Games, the inaugural 2015 European Games, the FIFA U-17 Women’s World Cup, coupled with Eurovision and other entertaining competitions. Billions of dollars have been spent in construction of venues, rebuilding the infrastructure and public relations campaigns to put the city on the world map for international events. One of the most remarkable venues Baku has is the Baku Olympic Stadium just a short drive from the city center — and even a shorter drive from the Heydar Aliyev International Airport (GYD) — which welcomed its first spectators during the opening of European Games in 2015. This is where the much-debated UEFA Europa League final will take place on May 29.

The venue is a 225,000-square-meter stadium which seats 68,700 spectators. Aside from the European Games, the stadium has already hosted a series of notable football matches, including the home games of Qarabag FC in 2017, when the Azerbaijani team for the first time in the country’s history qualified for UEFA Champions League. All games, including matches with Roma, Chelsea and Atletico Madrid were held without an incident. Tens of thousands of European fans have flocked into Baku to saw their home teams take on Qarabag. That might be on the reasons Baku was trusted with holding the Europa League final, and more so, with hosting 3 group stage and 1 quarter-final matches in Euro 2020.

Why the fuss over the location of Europa League final?

European teams might have gotten used to competing in European capitals which, on their part are used to welcome thousands of fans. The comfort of boarding a bus from a small Bavarian town or a Euro trail train from Paris to Madrid, is no doubt appealing. That, however, does not mean a four to five hour flight from most of European capitals to Baku, is out of range. The Liverpool manager Jurgen Klopp doesn’t seem to agree though. When speaking at a news conference, Klopp wondered what the decision-makers “ate for breakfast” when they were choosing Baku for the Europa League final over other cities.

The Stuttgart-native who made a name while Borussia Dortmund manager, seemingly suggested that Baku might be out of range for an average European fan. Why the Liverpool manager made such a remark is unknown. What is known though is that Baku is no different from any other city in Europe, Asia, Africa, or any other continent where millions of fans pour in for international tournaments.

Take the last World Cup in Russia, for example, where millions of European fans traveled to in the summer of 2018, even though some of the cities where the most-watched football competition was taking place, allegedly lacked facilities or infrastructure to meet the demand. That includes hundreds of thousands of German and British fans who were there to support Die Mannschaft and The Three Lions, respectively. Baku which has grown exponentially into a major tourist destination in the last few years, is no different. Hundreds of hotels and private Airbnb renters are already accepting reservations through end of May. The Azeri leadership has instituted a new system of visa application couple years ago, facilitating expedited and cheap travel to the South Caucasian country.

Meanwhile, the Azerbaijani football official Elkhan Mammadov has fired back at Klopp, saying the association was “unpleasantly surprised” by the statements of a “great specialist.” He added that football should not be restrained within the boundaries of Europe but should rather be globalized. Indeed, although the most expensive clubs and athletes belong to Europe and European football remains most-watched throughout the world, removing geographical boundaries will only generate more interest and lead to development of the sport across the world.

A football cartoonist Omar Momani, took it upon himself to ridicule Klopp’s statement and invite him to experience the Azerbaijani hospitality. “Join us Mr. Klopp Azerbaijani breakfast brings people together and makes everyone happy! It is a must try!”, says the cartoon depicting Chelsea and Arsenal at a joint breakfast with Klopp longing for the breakfast table.

Klopp was not alone in his criticism. The British Foreign Office released a warning this month cautioning its citizens to be careful at best, and against the travel to Azerbaijan, at worst. The British government even went as far as spooking the British nationals with possible terrorism. “Terrorists are likely to try to carry out attacks in Azerbaijan,” the statement warns although it adds that an estimated 7,000 British nationals travel to Azerbaijan and back trouble-free.

The Azerbaijani Foreign Ministry responded with a statement saying the position of the British Foreign Office was not understandable. “Along with the other positive features of our country, tranquility, security and stability in Azerbaijan are among the most important factors attracting foreign tourists,” the spokesperson for the ministry Leyla Abdullayeva said.

It does, indeed, come as a surprise that the British government warns against terrorism in Azerbaijan when Britain itself has seen more of international and domestic terrorism than any other European country, including the infamous suicide bombings in July 2005, or the recent knife attack by the Westminster. The fact of the matter is that the United Kingdom has more disgruntled enemies and hate crimes than Azerbaijan, largely known for religious and ethnic tolerance.

The fact of the matter is that terrorism in the new normal, whether it’s London where 56 people died in 2005, or Madrid where 193 lost their lives during the train bombings. One thing is clear: terrorism must be condemned and fought against, and when it comes to high-scale international events, government should join hands in protecting and defending citizens of the world. Only actionable cooperation will defeat terrorism and hate, not superfluous statements.