Home / Azerbaijan / Culture / Unique caricatures to be presented in Baku

Unique caricatures to be presented in Baku 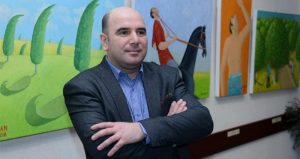 Works of well-known Azerbaijani caricaturist will be showcased in Baku.

The exhibition of Soltan Soltanli will open at Irshad Hotel on January 14, Yenicag reported.

More than 20 of art works will be presented to art connoisseurs.

Soltan Soltanli successfully represents Azerbaijan at international exhibitions and competitions, where his works are often awarded with prizes.

In 1991, Soltan came to Baku to enter the former Azerbaijan State School of Arts named after Azim Azimzade, but he failed. After returning to Agsu , he increased his contacts with the nature and tried to feel the nature profoundly.

Soltan’s father was against his son’s wish. That is why Soltan drew his paintings secretly.

He had only a way to come to Baku in order get high education. He had also a great interest in the literature. So in 1993 Soltan entered the philology faculty of Azerbaijan State Pedagogical University and graduated it in 1997.

Having come to Baku, Soltan got interested in painting very much, he went to the exhibitions and visited the famous painters’ and sculptors’ studios, wrote articles about them. His intention was decisive: to enter the School of Arts.

The paintings by Soltan Soltanli are the mature examples of the modern art and painting. The intellect and philosophy are the main peculiarities for Soltan’s activity.

He tries to enlarge the dream world of the humanity with his works and to show the essence of the real world.

Each of his work contains a certain idea and philosophy.