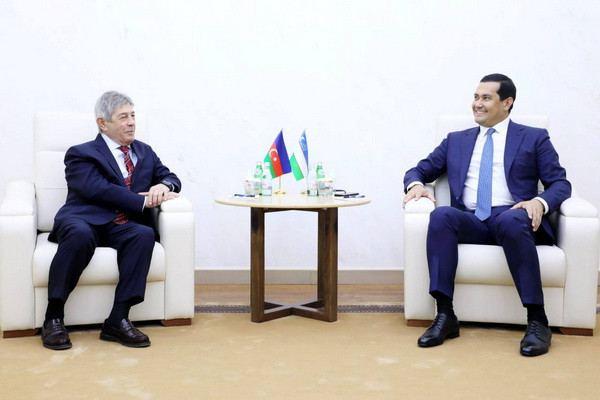 During the talks, the parties discussed the current agenda of bilateral cooperation, the prospects for its development, as well as the progress in the implementation of previously reached agreements.

“Priority areas for increasing investment cooperation are set to be projects in the fields of agriculture, production of building materials and tourism and it was agreed to attract Azerbaijani companies to establishment of industrial cooperation with Uzbek manufacturers in the areas of textile, leather-shoe, jewelry and electrical industry,” the statement said.

The meeting also discussed increasing the volume of mutual trade; the economies of the two countries have all the prerequisites for further increasing annual trade volumes to $500 million in the near future.

The parties also focused on the prospects of deepening cooperation in the transport and logistics sphere and considered increasing mutual freight transportation and the transit potential of the two countries. Possibilities of creation of joint agrilogistics clusters focused on processing and export of agricultural products was also among issues discussed.

As a result of negotiations, the parties expressed their commitment to active cooperation on the implementation and promotion of previously reached agreements, as well as expanding the agenda of bilateral partnership.