Vusal Gasimli: “Industrial production in Karabakh will increase in the post-conflict period” 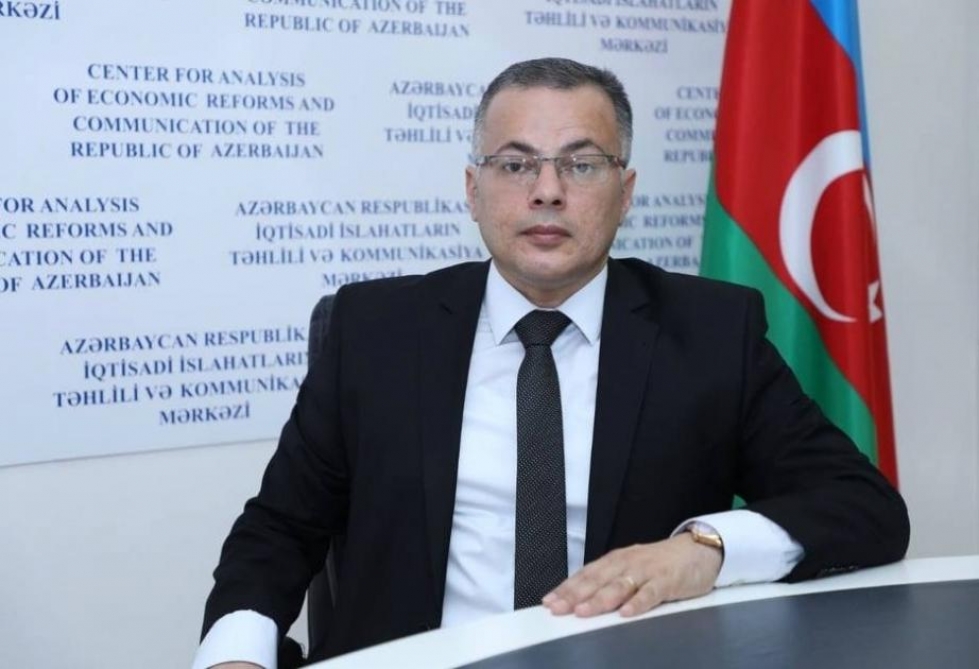 The victorious march of the Azerbaijani army under the leadership of President Ilham Aliyev continues, and Karabakh is liberated from occupation. The Center for Analysis of Economic Reforms and Communication is seriously analyzing the prospects for economic development of Karabakh in the post-conflict period. Head of CAERC, Doctor of Economics Vusal Gasimli gave an interview about the industrial potential of Karabakh. According to him, Karabakh has the potential for the development of the mining, metallurgical, manufacturing, timber, creative, as well as food and electricity production industries.

According to Vusal Gasimli’s opinion, Karabakh has a great potential for industrial development, and new assessment of resources will let us have a more accurate program. “The vast forests of the mountainous zone of the Lesser Caucasus (Caucasus Minor) are important for the development of the timber and tourism industries. The total forest area of the region is about 246.7 thousand hectares, including 13.2 thousand hectares of valuable forests. The area of specially protected natural areas in our country has reached up to 890 thousand hectares with 42.3 thousand hectares of them under occupation,” he said.

Vusal Gasimli also noted that after the end of the occupation, the Mountainous and Aran zones of Karabakh will be integrated in terms of industrial production. In his opinion, in Soviet times, Nagorno-Karabakh developed in close economic ties with the Aran zone of Karabakh and other economic regions of Azerbaijan. He said: “Roads running in all directions created close economic ties between two areas. The overwhelming majority of enterprises located on the territory of Nagorno-Karabakh functioned on the basis of fuel, raw materials and materials imported from regions of Azerbaijan, and many worked as branches of large enterprises in Baku. In 1985, only 8% of cocoon raw materials supplied to the Silk Factory in Khankandi were produced in Nagorno-Karabakh, and the remaining 92% were imported from other regions of Azerbaijan. While in 1986 only 0.3% of the economic relations of the Nagorno-Karabakh region and 1.4% of imports made the share of Armenian SSR, 33.3% of the goods produced in the former region were sold in the remaining part of Azerbaijan. At that time, the center of the Nagorno-Karabakh Autonomous Region Khankandi was directly connected with the railways and highways of Azerbaijan and, in general, with the transport and communication system of the republic. The railway distance from Khankandi to Baku is 392 km. In short, before the occupation, Karabakh always developed as a part of the economy of Azerbaijan.”

Speaking about industrial areas, Gasimli also touched upon the electricity production potential provided by water resources. He noted: “In the post-conflict period, the Sarsang reservoir with a capacity of 50 MW and the Khudafarin reservoir with a capacity of 280 MW, as well as other large and small power generation plants will be able to meet the needs Karabakh in energy. In general, the inclusion of these power plants in the country’s energy system means not only an increase in capacity, but also a geographic diversification of sources, that is, a decrease in the load on Absheron, Shirvan and Mingachevir, as well as a growth in the share of alternative (renewable) energy production in the total production.”

According to Gasimli’s opinion, the industrial and recreational opportunities of the region will also be widely used in the post-conflict period. “It is assumed that up to 40 percent of the mineral water reserves of Azerbaijan were under occupation. In the occupied territories, there are about 120 deposits of mineral water of various composition and medical value. This means a supply of 7805 m3 / day of mineral water. Yukhari and Ashagi Istisu, Baghirsag, Keshdak mineral water springs of Kalbajar district, Iligsu, Minkand in Lachin district, and Turshsu, Sirlan in Shusha district and other mineral waters attract special attention. Mineral waters of Istisu, located on the territory of Kalbajar district, are distinguished by their favorable gas and chemical composition, high temperature, and large natural resources. As in the 80s of the last century, a large resort and the mineral water bottling industry can be revived at the Istisu spring. The same approach can be applied at the Turshsu mineral spring in Shusha,” said Vusal Gasimli.

The Center for the Analysis of Economic Reforms and Communication estimates that 250 thousand hectares of land that is under occupation and 120 thousand hectares of unused land located near the former contact line could potentially be used for crop rotation in the post-conflict period. Gasimli believes that this substantiates the development of the processing and food industry in Karabakh.

Gasimli also said that Karabakh has great potential for the development of the mining and metallurgical industries.

“Of course, we need to re-evaluate industrial resources. There are 155 different types of mineral deposits in the occupied territories, including 5 gold, 6 mercury, 2 copper, 1 lead and zinc, 19 facing stone, and other deposits. Imagine that the world market price for confirmed industrial-purpose gold reserves in the amount of 132.6 tons are about 8 billion US dollars. Deposits of rare and valuable minerals are widespread in the region. Reserves of significant copper-zinc ores are concentrated in the Mehman deposits located in the eastern part of the Lesser Caucasus. Moreover, the Shorbulag and Aghyatag deposits of Kalbajar district have industrial mercury reserves. The occupied territories are very rich in various types of building materials, which are of great importance for the industry and construction of Azerbaijan. There are large reserves of such materials at the Chobandagh, Shahbulag, Boyahmadli and other deposits located in Aghdam district. Also, large deposits of building stone are located in Khankandi, and marble in Harov. ”

Gasimli also stressed that Karabakh can turn into the center of the creative industry of Azerbaijan. “Development of music, literature, crafts, theater, carpet weaving and other creative industries is possible in Karabakh.”