Home / Uncategorized / Why there is still no World Environment Organization?

Till today, there has been 40 years of debate on establishing of World Environment Organization. The call started from the US on creation of International Environment agency. However, instead of establishing new separate and autonomous environment organization, in 1972, Stockholm Conference on Human Environment, member states of UN agreed on establishing environment organization operating within the UN system, called United Nations Environment Programme (UNEP). (Georgeson, 2014). In all means, we cannot claim that UNEP reforms all those regulations were absolutely dysfunctional. It achieved a number of successes over the years, especially catalyzing new Millennium Ecosystem Assessments over the world. (Charnovitz, 2002). Despite the efforts, the environment governance doesn’t function, as it needs to be done. The environment treats are often to weak to address the problem or there is lack of coordination between states and lack of integration among other international organizations. Furthermore, more than half of the world states are developing nations. Sometimes the objective of being member of one organization counteracts the objective of another organization. Membership of states to different number of organization, which is different in values and objectives, doesn’t match each other. Thus, there are many different factors why we still don’t have WEO. We should question first: “Do we really want it?” “What kind of organization we need?”

World needs WEO for two reasons: first one is that many ecosystems are deteriorating as a result of human behavior. Our environment is under serious and uncontrolled threats and we should recognize these threats and future explosions. Second, the world needs one big international environmental governance and rationalization. (Charnovitz, 2002)

Problem with the first reason of creating WEO lies in many parts of human behavior and its recognition of global climate change. We should firstly recognize that we have that extreme changes in global climate and ecosystems, thus we need to take common actions to prevent future disasters. But, we don’t. Otherwise people have information deficit on environmental issues or they live in denial as Noorgard stated. (Noorgard, 2011) It’s still blurry that why some countries or people have this denial of global climate change while a range of scientific approvals came from the different scientists and organizations. NASA Climate Change unit has big role of decreasing information deficit around the world. On the other hand, denial is related to the development of states. Thus, many states are in search for profit maximization rather than environmental concerns. Exporting oil, accepting to bury nuclear waste in return of money, building cities, which called “big forests from stone” are reasons of this denial probably.

Moreover, we should see the failing points of UNEP and then recognize that what kind of organization we need. I think, world leaders haven’t come to this conclusion yet. We are just standing at the starting point for many years and probably will stand from now on. We should recognize the points where existing environment organizations failed and how to make changes. Why UNEP fails in implementing its policies in states is clear when we see how its revenue differs from another nations. (see Apendix 1.) If governments wanted to make UNEP stronger they would do so. The establishment of WEO will not strengthen environmental governance. (Charnovits, 2002) Analysts sometimes make the mistake of thinking that reorganization or establishment of new separate organization can driven policies. However, it is not that much simple at all. We should avoid the risks that new organization won’t duplicate what already exists. (Biermann, 2000) Another problem, of course lies on attracting member states. UNEP has around 15 offices while UNDP has 177. UNEP is in the 16th place for ranking revenues of organizations while UNDP is the 2nd place (Apendix 1.). Hence, the risk of having fewer members on WEO board isn’t decreased yet. This is because of the fact that developing nations want to reach the level of developed nations, and their willingness to sign up for this kind of organizations is lower. 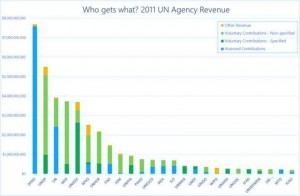