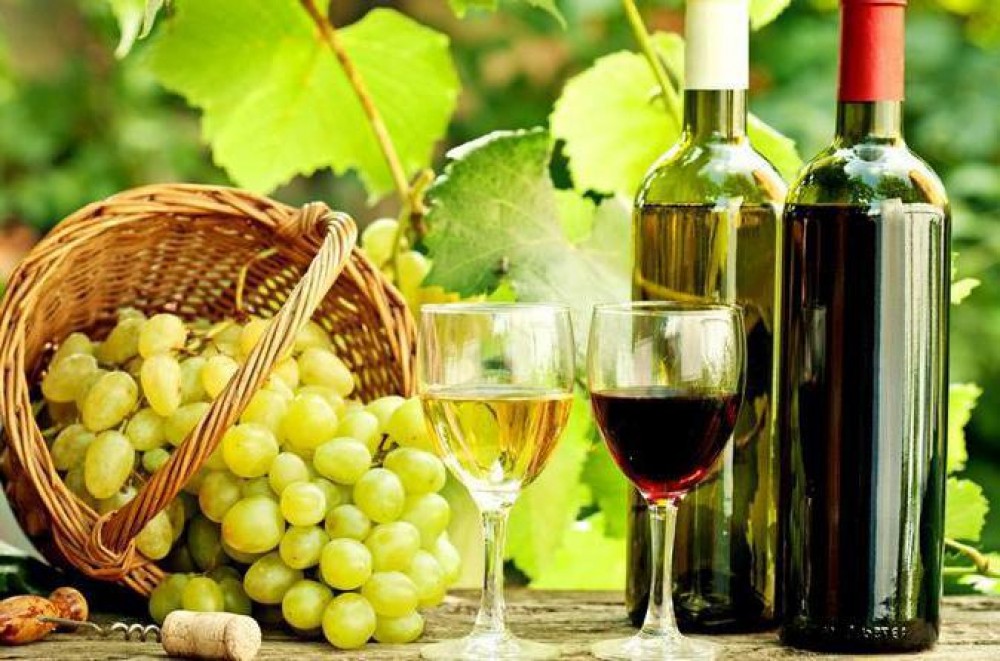 Wine is an alcoholic drink made from fermented grapes or other fruits. The natural chemical balance of grapes allows them to ferment without the addition of sugar, acids, enzymes, water, or other nutrients.

Wines made from fruits other than grapes are usually named after the fruit from which they are produced (for example, pomegranate wine, apple wine or elderberry wine), and are also called fruit wine.

For instance, archeologists have found jars with remains of wine buried in the Goygol region, and stone fermentation and storage vessels that included residue and grape seeds in the digs of settlements in Kultepe, Karabakhlar and Galajig. All the findings date back to the second millennium BCE.

Greek historian Strabo mentioned Azerbaijani wine in the first century BCE. Arabic historians and geographers Abu’l-Fida, Al-Masudi, Ibn Hawqal, and Al-Muqaddasi have described the extensive viticulture around Ganja and Barda even after the Islamic conquest.

During the Middle Ages, drinking wine was strictly prohibited by Islam, but it was used by the ruling class. Some representatives of the nobility in Azerbaijan used wine to alleviate tiredness or entertain their guests.

Because Azerbaijan’s medieval wine was strong, people diluted it with water before drinking it. It was called “mey” in Azerbaijani. Wine made from grapes was called “sharab”, while wine made from other fruits such as apples, pomegranates, and mulberry was known as “nabiz”. In addition, many types of wine were named “chakhir.”

Wine was also used for medical purposes in the Middle Ages. Avicenna pointed out that drinking a small amount of wine was good for the stomach and other organs.

In his writings in 1311, historian and scholar Yusuf ibn Ismail al-Kutubi noted that small doses of medical wines strengthen the sense organs and the whole body. Medical wines treat melancholy, depression, and bad moods, reduce anger and nervousness, give humans courage and generosity, and counter the effects of various poisons.

Winemaking improved with the arrival of German immigrants from Wurttemberg to Azerbaijan in the early 19th century. Afterwards, the wine industry was developed and enhanced by hefty investments. Famous German family businesses such as the Vohrer Brothers and the Hummel family based in Helenendorf industrialized wine production, making it competitive with European wines.

According to historians, there are more than 450 different categories of wild grapes found in Azerbaijan which have been used for winemaking throughout the country’s history.

Azerbaijan has all the natural conditions -mountainous terrain and close location to the Caspian Sea- for the development and expansion of winemaking.

Wine is produced in several regions of Azerbaijan. Vineyards are found at the foothills of the Caucasus Mountains and in the Kur-Araz lowlands. Ganja, Nagorno-Karabakh, Shirvan, and Nakhchivan have emerged as centers of wine production in Azerbaijan in the 21st century.

Vineyards in these regions account for about 7 percent of the country’s cultivated land. The regions are famous for 17 vine and 16 table grape varieties.

Currently, there are nearly 10 wineries and vineyards that produce wine in the country. The largest one is Vinagro, created in 2006. Exports to other countries are steadily growing due to the good quality of Azerbaijani wine products. Most of these products are currently destined for Russian and European markets. Since the restoration of Azerbaijan’s independence in 1991, the Azerbaijani wines have won many prizes at international competitions.