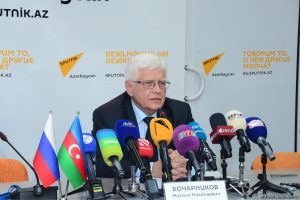 The year 2019 will be eventful in terms of development of trade cooperation between Azerbaijan and Russia, Russian Ambassador to Azerbaijan Mikhail Bocharnikov said at a press conference in Baku on December 24.

The ambassador noted that Russia regards relations with Azerbaijan as a strategic partnership.

“This year saw strengthening of this strategic partnership. Activity was observed in all areas of cooperation,” he said.

Speaking about the priorities of cooperation for 2019, Bocharnikov noted that they include continuation of work in the areas agreed upon in 2018.

“This year, we agreed on a lot of things, above all, on the development of trade and economic relations,” the diplomat said.

He said that the parties also plan to increase humanitarian cooperation next year.

Bocharnikov also touched upon the tourism aspect of relations, saying that Russia and Azerbaijan intend to create a trans-Caspian transport line, as well as develop cruise tourism in the Caspian Sea

He highlighted the importance of signing the convention on the status of the Caspian Sea this year in August.

“I am very pleased that in Azerbaijan it is considered as a very important event. This convention allows us to comply with the agreements reached on specific issues,” said diplomat adding that there are still unsettled delimitation questions, but not between Russia and Azerbaijan.

Bocharnikov said that efforts will be made to ensure the safety of navigation, preservation of biological resources and cooperation in other areas.

Two types of cruises on the liner – short (seven to eight days) and long (13-14 days) – are planned. Short cruises will cover calls to several ports in the northern and southern part of the Caspian Sea, while long cruises will include calls to the ports of all five Caspian countries. Approximate commissioning of the liner is scheduled for next year. Most of the Caspian cruises are planned to begin and end in Baku.

In this sense, it is necessary to build ships, and one ship is being built in the Astrakhan region. The commissioning of the ship is scheduled for the next year approximately.

The ambassador mentioned his recent visit to the Azerbaijani ski resort in Shahdag.

“We are establishing active cooperation between the ski resorts of Azerbaijan and North Caucasus,” he added.

The possibility of the connection the Azerbaijani and North Caucasian resorts of Russia by a single ski pass was discussed during a business forum entitled ‘Invest in the Caucasus’ in Grozny this December.

In 2018, there was a rise in Russian tourist flow to Azerbaijan by 20 percent, more than 800,000 Russians visited Azerbaijan.

Bocharnikov noted that Azerbaijan and Russia intend to create joint ventures (JV) in oil production as well as there are plans to set up enterprises for machine building in agriculture.

“Our plans envisage creating joint ventures in an effort to organize oil production. On the part of the states, we will support the enterprises, which in their turn will enhance the development of industrial production. It would be better if our enterprises focus on industry in order to promote the diversification and economy of Azerbaijan, including our economic ties,” he said.

Answering a question about the results of the 17th meeting of the intergovernmental commission held in Moscow on December 14, Bocharnikov mentioned that Azerbaijan and Russia took another step to develop economic cooperation.

The agenda of the intergovernmental commission was very extensive and concerned specific cases to be implemented in the coming years. Topics that were most actively discussed include cooperation in the trade and economic sphere, agriculture, food security, industry, transport and humanitarian field.

Military cooperation between Russia and Azerbaijan is actively developing, he noted.

Bocharnikov went on to add that the corresponding decision was made ther at the meeting of the intergovernmental commission.

“Azerbaijan has actively participated in international military game competitions over the past few years. As far as I know, some of these competitions may be held in the territory of Azerbaijan at sea next year.”

Bocharnikov noted that the defense ministers of the two countries contact several times a year, adding that this year, the head of the General Staff of the Russian Armed Forces visited Azerbaijan three times.

He said that some Azerbaijani servicemen are trained in Russian military universities. Ships of the Navy and the Border Service of the Federal Security Service of the Russian Federation arrive in Azerbaijan’s ports, he said

Touching upon the Armenia-Azerbaijan Nagorno-Karabakh conflict Bocharnikov said that a more favorable atmosphere for the settlement of the conflict will be created in 2019.

“The basis of this has already been laid this year,” he said. “Several meetings were held at the highest level. A meeting is expected between the foreign ministers of Azerbaijan and Armenia in January 2019. Russia is ready to continue to help resolving the conflict.”

Russia is a strategic partner of Azerbaijan. Last year, the two countries celebrated the 25th anniversary of establishing diplomatic relations. The legal framework between the countries includes over 180 documents, including about 50 in the economic sphere.

Azerbaijan is one of the main economic partners of Russia among the CIS countries and Russia remains one of Azerbaijan’s main foreign trade partners. Interregional cooperation plays an important role in the development of Russian-Azerbaijani trade and economic relations and the increase in trade turnover. Russia ranks first in terms of export of non-oil products from Azerbaijan.

Previous Farmers to gain enormous benefits from “Green corridor” on customs borders of Azerbaijan: minister
Next Excise duty on import of buses to be introduced in Azerbaijan