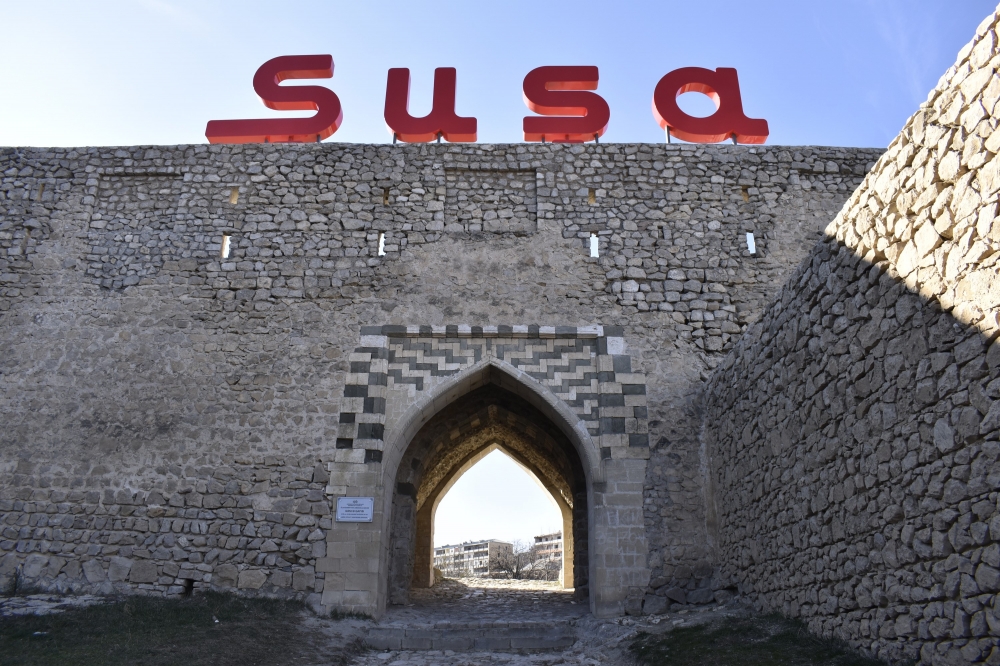 After the liberation of Shusha, one of the significant centers of Azerbaijan’s historical, cultural, political and social life, the cradle of art and culture and the source of our pride, Azertac correspondents visited the homeland of Panahali Khan many times to make numerous reports and news of different topics. The next visit of Azertac’s regional correspondent to this beautiful city, which is situated in the bosom of the mountains, took place in 2022, which President Ilham Aliyev announced the Year of Shusha. Azertac presents a report of regional correspondent’s visit to Shusha.

Although we come to Shusha on a winter mourning, the city is meeting us with sunny weather uncharacteristic of January, while people there are treating us with smile and tenderness. The reconstruction work and cleanness of the city call our attention from the very first moments. Wide-scale restoration and reconstruction work has started here following Shusha’s liberation from occupation. Besides building infrastructure, restoration of the real historic face and historical and cultural monuments has kicked off and cultural mass events have resumed in Shusha, which has been announced by President Ilham Aliyev the capital of culture. The Order by President Ilham Aliyev on declaring 2022 as the “Year of Shusha” will pave the way for the development and improved reputation of the capital of our culture, playing an important role in promoting the history of Karabakh in the world.

During this time’s visit we wanted to see the historic sights of the city and talk to people who are originally from Shusha. We saw some people talking when we were passing by a module-type hospital and we approached them. We said hello and told them about our thought. One of them said: “I am from Shusha. I know every inch of the city and its people. I can help you in any way you need”.

We are starting a tour of the city together with our interlocutor, driver Jeyhun Aliyev. He is heartily speaking about the history, monuments, ancient quarters and pre-occupation happy days of Shusha. Saying that he believes he is the happiest man on earth for reuniting with his native city after 30 years, he expressed his confidence that the beautiful days which Shusha had before the occupation will come back: “During the 28 years of occupation, Armenian vandals ruined the historic monuments and houses of renowned Azerbaijanis in Shusha and wanted to erase the trace of our people here. Have a look at the city, nothing has been built here over a period of about 30 years. Because they knew that the real owners of Shusha will come back not only 30, even after 130 years. We have already returned here. Shusha is free and its new development era is starting. Our government has done a lot of work to restore Shusha over the past year. Our President announced 2022 the “Year of Shusha”. It makes inhabitants of Shusha happy. We are sure that the restoration and reconstruction work will gear up in Shusha in 2022. The wounds that Shusha has suffered over the past 30 years will be healed. Shusha will again become the center of Azerbaijan’s culture and happy days of Shusha residents will start again in Shusha”.

Shusha to be better known in the world as an ancient, eternal and perpetual Azerbaijani city

There are many inhabitants of Shusha among the people who work in different areas in the city. The joy of these people, who have reunited with their native city after many years of longing thanks to the decisiveness of the Commander-in-Chief and the might of our army, is endless. Najiba Ismayilova, who works as a chief nurse in the module-type hospital in Shusha, feels happy to be able to return to her native city and work here. “I always dreamed of becoming a bird, flying to see Shusha and Jidir Duzu and return. Today I have achieved my biggest dream after many years. Our daydream has come true. I am in Shusha again after 28 years. I live and work here. I provide medical services to our compatriots working in Shusha. I am very happy about it. I would like to express my appreciation to our President for giving this happiness to us. I am also thankful to our head of state for announcing 2022 the “Year of Shusha”. It again demonstrates the significance that our government and President attach to Shusha. Shusha is a dear and sacred city not only for its inhabitants, but also for every Azerbaijani. Therefore, like inhabitants of Shusha, our entire people welcomed with sympathy the fact that 2022 was announced the “Year of Shusha”. We believe that the events, which will be held within the framework of the “Year of Shusha”, will cause more rapid development of our Shusha and Shusha will be better known in the world as an ancient, eternal and perpetual Azerbaijani city”.

During our visit to Shusha, we want to take advantage of good weather to tour as many places as possible, see ancient quarters and historic monuments, as well as the beauties of the wildlife. Although the devastated looks of the Palace of Panahali Khan, who set up Shusha, the houses of Natavan, the daughter of Karabakh Khan, genius Uzeyir Hajibayli, a renowned representative of the Karabakh singing school, Khan Shushinski and tar player Sadigjan, as well as the mosques in the ancient quarters, the Shirinsu bath house and other buildings, as a result of Armenian vandalism burn our hearts, we were glad to see the restoration work of our government in the historical and cultural monuments. The “Khan Qizi” spring has been restored following Shusha’s liberation from occupation. The Heydar Aliyev Foundation has performed repair, renovation and restoration work at the museum and mausoleum compound of genius Azerbaijani poet and public figure Molla Panah Vagif within a short period of time. A monument to renowned Azerbaijani composer Uzeyir Hajibayli and a bust to genius Azerbaijani poet Molla Panah Vagif have been erected in the city. The house-museum of people’s artist Bulbul has been renovated. Currently, a number of infrastructure projects are underway in Shusha and the administrative building, which will host the Special Representative Office, is being reconstructed in a modern way. The Heydar Aliyev Foundation is carrying out renovation work at the Ashaghi Govhar Agha, Yukhari Govhar Agha and Saatli mosques, as well as the estates of the Mehmandarovs.

World to witness grandiose events happening in our capital of culture

The last place we visited in Shusha was the house-museum of people’s artist Bulbul. Repair, renovation and reconstruction work under the instruction of President Ilham Aliyev was carried out last year at the house-museum, which was closed following exposure to Armenian vandalism in the course of the first Karabakh war in 1992. The visitors of the museum not only become familiar with the life and activities of renowned singer Bulbul, but also received information on the music, culture and history of Karabakh.

The director of the museum, a native of Shusha, Fakhraddin Hajibayli, shared his thoughts on his return to his native fatherland after longing for many years, the activities of the museum and the development of our cultural capital. “I was not born in Shusha, but my grandfather and grandmother are originally from here. I am a grandson of baker Mukhtar from the Mardinli quarter. Shusha is my native land. We have lived for many years by longing for our Karabakh and Shusha. Therefore, I can’t express the feelings I had when I first arrived in Shusha. The city is the land of my father and grandfather. Its soil is dear to me. These are not ordinary feelings. There are some feelings that can’t be expressed with words”.

Expressing his gratitude to President Ilham Aliyev for the work to restore the historic look of Shusha, return its previous glory and reunite with its traditional cultural life, Fakhraddin Hajibayli said that Shusha is a precious and lovely city not only for the people of Shusha, Karabakh and Azerbaijan, but also for the entire Turkic world. The announcement of 2022 the “Year of Shusha” will give a great impetus to the development of Shusha, which is considered to be the cradle of our culture and the pearl of our Karabakh. The world will witness grandiose events taking place in the capital of our culture in 2022. From this viewpoint, the announcement of 2022 the “Year of Shusha” means realization of the dreams of the people who consider Shusha to be part of their hearts and declaration of our moral values, history, culture, art, music and Mugham art to the world.

It is getting dark now. As if time passed faster in Shusha. One wishes to stop the time, visit more places, see more sights, stay in this miraculous city longer, not to depart and breathe in more of its air. As if this land and this city had a miracle and a marvel. It has an aura enchanting everyone. However, we have to depart so that we can return here again. We hope that we will return with more impressions during our next visit to this beautiful city in the bosom of the mountains.