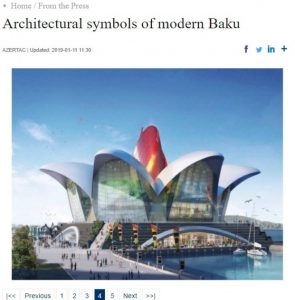 “Baku has always been famous for its architectural appearance. On the urban scene, masterpieces of ancient architecture, such as the Maiden Tower or the Palace of the Shirvanshahs, organically coexisted for many years with the buildings of the classicism era of the first oil boom and the Soviet minimalist buildings.

But time moves on. And now, along with the rapid development of the country, the appearance of Baku has changed dramatically. As flashes of light, samples of futuristic architecture burst into it, which not only did not violate the harmony of the city, but also turned into new symbols of the capital of Azerbaijan.

The shopping and entertainment center Park Bulvar was, perhaps, the first example of super modern architecture in Baku. Today it continues to admire: the streamlined shape of the facade, two huge glass atriums in the form of cocoons, transparent elevators, a central hall flooded with light – then in 2010 it seemed that an alien ship had landed on Baku Boulevard.”

“Park Bulvar instantly became a popular meeting place for citizens, offering a new format of pastime: it turns out that not only shops can be located in a shopping center, but also cinemas, a planetarium, a children’s play center and a food court with many cafes and restaurants.”

“Without the famous Flame Towers complex, consisting of three separate buildings, it is difficult to imagine modern Baku today. The opening of the complex, which was constantly postponed, the townspeople waited for five years. And, finally, in 2012, the Flame Towers appeared in front of Baku residents in all their glory, hitting everyone with their illuminations. The surface of the towers is completely covered with LED screens that display various animated visual images that are clearly visible from the farthest points of the city. It is worth noting that the coverage of Flame Towers buildings was recognized as the best in the world according to a skyscrapercity.com survey, an influential forum on urban planning. In addition, it is one of the highest buildings in Azerbaijan (182 m).

Currently, one of the towers is dedicated to residential residences, the second functions as a business center, and part of the third is occupied by the hotel of the world famous Fairmont chain. Also in the Flame Towers complex is located the only IMAX cinema in Baku.

By the way, one of the releases of the Build It Bigger program on the Discovery Channel was devoted to the construction of the Flame Towers complex,” the article says.

“The Heydar Aliyev Center, designed by architect Zaha Hadid, the first woman in history to be awarded the Pritzker Prize, has gained not less fame. The design of the building is striking in that it practically does not use straight lines, only smooth wavy shapes.

This complex building, which opened in 2012, includes the Auditorium, a museum, exhibition halls, a library and a large landscaped park. In order to achieve perfect acoustics, the main hall of the Center is completely made of natural wood and has smooth curves. It often hosts concerts of classical music. And in the exhibition pavilions of the cultural center unique exhibits are displayed, reflecting the history and cultural heritage of Azerbaijan.

In 2014, the Heydar Aliyev Center received the Design of the Year award, as the best building in the world. The construction of this complex was also covered in the programs of the Discovery and Science Channel.”

“Speaking about the modern architecture of Baku, it is impossible not to mention the concert hall Crystal Hall, located near the State Flag Square in Baku. The construction of the complex was timed to the Eurovision Song Contest, which was held in Baku in 2012.

Crystal Hall is equipped with numerous modern dynamic lighting installations in the hall and outside, allowing you to create various effects. For example, during the Eurovision contest, the lighting of the outer walls reproduced the colors of the flags of the participating countries. The creator of special effects – the Swiss company Nüssli International AG claims that none of the cities of the world have ever had anything like this before.

The Crystal Hall complex is a universal venue that can provide not only concerts of world stars, but also sports events. For example, part of the competitions of the first European games in 2015, were held in Crystal Hall.”

“An elegant very beautiful skyscraper – one of the highest in Azerbaijan, SOCAR Tower is located on Heydar Aliyev Avenue in Baku. Upon opening, it will become the main office building of the State Oil Company of Azerbaijan.

The construction is 209 m high and is notable for its smooth forms, symbolizing the moving stream of fire – the central idea of the skyscraper design in the style of structural expressionism. And initially it should have been two buildings, as if intertwined with each other, but later the project was changed.

Inside the building, designed for a staff of more than 2.200 thousand people, in addition to the work rooms, there will be five conference rooms, a fitness center and several dining rooms.

This already completed building of glass and concrete, 130 meters high, is among the five highest buildings in Azerbaijan. The building is located near the Heydar Aliyev Center at the intersection of Heydar Aliyev Avenue and Babek Avenue.

Its construction was begun on the basis of an agreement between a local developer and a Donald Trump company, then still an “ordinary” businessman. Known as the “Trump Tower”, the building consists of two semi-circles in the shape of sails connected at right angles. Along the edges of the building are placed LED-screens, which are provided for different illumination.

The franchise building of Trump International Hotel & Tower Baku, was supposed to act as a hotel and office center. However, after the election of Donald Trump as president of the United States, it was announced that his company had withdrawn the license agreements for the construction of a hotel in Azerbaijan.

Currently, the building is empty, but this does not prevent the citizens from admiring its futuristic architecture.”

“Baku has a whole district with futuristic buildings – Baku White City. It develops on the site of the so-called Black City, which has existed since the end of the 19th century in the eastern part of Baku as a legacy of the first oil boom and the result of town-planning activities of the distant past. It played an important role in the oil industry for more than 100 years, carrying out activities for the processing, storage and transportation of “black gold”. Currently, the former industrial area is being transformed into a super-modern business center of the capital, the main principle of which is social, economic and ecological integrity.

Here you can already see the Baku White City Office Building built in the best traditions of modernism. The construction of the White City Mall, which promises to become the largest shopping and entertainment center in Baku, is in full swing. An Olympic-sized ice rink, hundreds of shops, cafes, restaurants, entertainment facilities, etc. will be located there.

This is only a small part of modern metropolitan buildings. The list goes on. For example, we can mention the building of the Baku Congress Center with 17 conference rooms, where you can see the world’s largest multi-pixel monitor installed in an enclosed space, the building complex Port Baku, with a large shopping center, and many others.

Finally, how many new facilities are still being built. The construction of Caspian Waterfront Mall, which should open its doors in the near future, is in full swing. Located on Baku Boulevard, this giant flower-like shopping and entertainment center promises to be the most beautiful shopping mall in the region,” the article concludes.