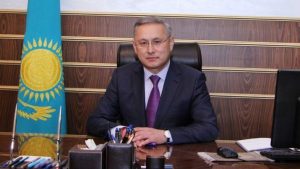 Mutual trade between Azerbaijan and Kazakhstan

In the first 9 months of 2018, the mutual trade turnover between Azerbaijan and Kazakhstan increased by 65.6 percent, the Kazakh ambassador said.”Azerbaijan’s exports to Kazakhstan, amounting to almost $36 million, increased by 65.1 percent, while imports from Kazakhstan to Azerbaijan rose by more than $133 million, showing an increase of 65.8 percent,” Issabayev said.The diplomat reminded that in April last year, the presidents of Azerbaijan and Kazakhstan instructed the governments to double the volume of mutual trade by 2020.”I think that by the end of this year we will reach an increase of 85-90 percent and thus, without waiting for 2020, we will fulfill the instructions of our presidents,” Issabayev said.The presidents of the two countries also identified the need to resume the supply of Kazakh grain to Azerbaijan. To fulfill this order, an appropriate working group was created between the ministries of agriculture, under which the parties develop practical mechanisms for increasing the export of Kazakh grain.”We already have some positive indicators in this matter. For the first 9 months of 2018, more than 200,000 tons of Kazakh grain were delivered to Azerbaijan against 76,500 tons in 2017,” Issabayev said.The ambassador added that along with the growth of grain exports, there is an increase in the supply of Kazakh rice by 3 times and lentils by 2 times in the volumes of 6,000 and 1,500 tons, respectively.

Trade contacts between the two countriesIssabayev also noted that KazakhExport, an export insurance company, plans to open a representative office in Baku to promote Kazakh products in the Azerbaijani market.”In turn, we expect the opening of Azerbaijani trading houses in the cities of Kazakhstan,” he said.The ambassador added that the implementation of these plans will further strengthen trade contacts and establish direct relations between the business communities of Azerbaijan and Kazakhstan.

Cooperation in transport and logisticsThe ambassador said that thanks to the work done in Kazakhstan to develop the transport and logistics infrastructure, the total capacity of the ports of Kazakhstan’s logistics hub in the Caspian Sea now exceeds 26 million tons of cargo per year.Issabayev noted that Aktau sea port has been expanded: now its capacity is about 20 million tons of cargo per year, and the construction of a ferry complex in Kuryk port with a capacity of more than 7 million tons per year has recently been completed.”In addition, in recent years, Kazakhstan has done tremendous work on the construction and renovation of railways from the border of China to the Caspian Sea with a total length of more than 2,000 kilometers,” the ambassador said.Moreover, the construction of the Western Europe-Western China transcontinental six-lane highway with a length of more than 2,700 kilometers was completed last year.The diplomat also noted the work carried out in Azerbaijan to modernize the transport and logistics infrastructure.”The ongoing modernization of the new Baku International Sea Trade Port will undoubtedly increase transit between our countries,” Issabayev said.The ambassador added that the commissioning of the Baku-Tbilisi-Kars railway last year significantly expanded the transit transport corridor connecting Azerbaijan and Kazakhstan.”Given the significant growth of transit traffic in recent years, I consider it justified and timely to create the Trans-Caspian International Transport Route (TITR) in 2014,” Issabayev said.The diplomat noted that in the framework of TITR, an effective tariff policy has been built and unified cargo transportation technologies have been introduced over the past years.”In general, a solid base in the transit and transport sector was formed between our countries, providing Kazakhstan and Azerbaijan the opportunity to become a transit hub for cargo transportation between Europe and Asia,” Issabayev added.

Cultural and humanitarian tiesThe ambassador also said that work on a book about Huseyn Javid, the famous Azerbaijani poet and playwright of the early 20th century, is at the stage of completion in Kazakhstan.”This book will be one of the first to be published in the Kazakh Latin script. In early December it will be presented in Kazakhstan, and then we will hold a presentation of this book in Baku,” Issabayev said.In addition, in December it is planned to present a book dedicated to the movement of the Kazakh Alash party in Azerbaijani language.Issabayev noted that along with close political and economic cooperation, the cultural and humanitarian dialogue between Kazakhstan and Azerbaijan has always held a special place in the bilateral relations of the two states.«The Azerbaijani Diaspora in Kazakhstan numbering 130,000 people is the ‘golden bridge’ between our countries. Azerbaijanis are an active part of Kazakhstan’s society, which is widely represented in the Assembly of People of Kazakhstan,” the ambassador stressed.The diplomat added that next year the embassy plans to hold Days of Kazakhstan Culture in Azerbaijan.