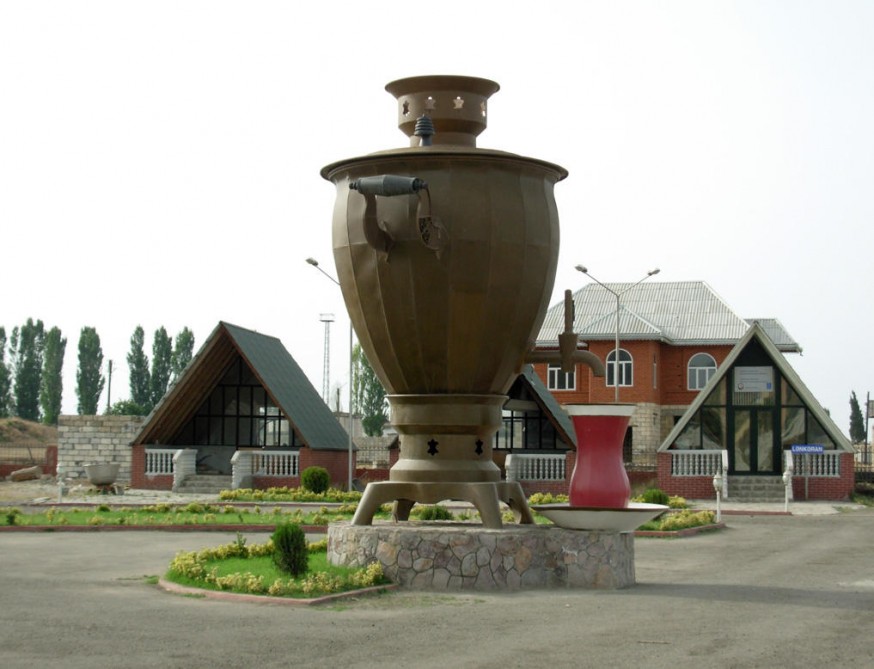 Lankaran is located in the south-eastern part of Azerbaijan on the shores of the Caspian Sea. This is one of the brightest and most beautiful cities in the republic. Original architecture and magnificent natural landscapes are the hallmarks of this city.

The wonderful climate, the sea and the presence of thermal springs attract a lot of tourists who want to relax and improve their health. And the ancient history and the abundance of attractions, do not leave indifferent fans of meaningful pastime.

The subtropical climate of the Lankaran region is ideal for growing citrus crops, rice and grapes. Great attention is paid to the production of tea in Lankaran. As a well-known exporter of this revered worldwide drink, the city is known not only in the territory of the former Soviet Union, but also in many European countries. Therefore, at the entrance to Lankaran tourists are greeted by a huge samovar.

And on the territory of Lankaran and neighboring Astara districts there is the Hirkan National Park, known for growing iron trees and populations of the rarest Persian leopard.

Few people know, but a separate perfume is dedicated to the fragrances of the Lankaran forest. After a trip to Lankaran, perfumer from Italy, Maria Candida Gentile, being impressed by the beauty she saw, created a new perfume. The presentation of the Lankaran Forest fragrance was held as part of the Fragranze 2016 niche perfume exhibition in Florence.

The author was inspired by a walk through a forest near Lankaran, in which iron trees side by side with bushes of bitter orange. This is how the author describes the impressions: “It was a very unusual feeling: the woven branches of old trees radiated incredible energy, which was felt almost physically. In the thicket of the forest, I noticed the fruits of a bitter orange – picked one and ran a fingernail over the skin: the smell spread in the air. So I understood the direction in which Lankaran Forest will develop: it describes the feeling of being in an unusual, fascinating forest”. The fragrance is sold on the official website of Maria Candida Gentile https://www.mariacandidagentile.com/prodotto/lankaran-forest/.

At one time, Lankaran was part of the Caucasian Albania state, and in 1743 it became the center of the Talysh Khanate. Most of the region’s population are Talyshs, who have retained their ancient traditions and customs. Since ancient times crafts have been developing here, such as making copper products, pottery, making national clothes, etc.

In Lankaran, an abundance of historical sights, among which Lankaran Fortress attracts particular attention, or rather its surviving fragments. It was built in the 18th century and was known as one of the most important defensive fortifications in the Talysh Khanate. Its walls made an enormous impression with their large forms and rows of strong teeth. The fortress was surrounded by a medieval moat, as needed, flooded with water. The main objects of the construction were the north and south towers, from which the aimed fire was conducted on the attackers.

On the territory of the fortress there was also a city bazaar, on the site of which two mosques were erected a century ago.

The most striking architectural landmark of Lankaran is Mirakhmad Khan’s House, located in the very center. This, practically, the palace was erected in 1913, and became the first three-story building in the city.

Despite the fact that his project involved two French architects, the appearance of the House of Mirahmad Khan clearly contains features of the national Azerbaijani architecture. The facades on the west and north sides are made of brick and white stone, while the east and south facades are exclusively made of red brick. Above the main entrance are clearly visible figures of mythical animals.

A large market mosque in the city of Lankaran was built in the 19th century. The minaret destroyed during the Soviet period is now restored and the mosque is still operational. The mosque is located on the market square of the city.

The Lankaran region is one of the most popular regions of Azerbaijan, where health tourism is developing. A part of the region is located along the coast of the Caspian Sea, one of the features of the coastline of which is black sand, which is believed to have healing properties.

There are hot springs in Lankaran, which have been used by local people since ancient times. Thus, the area around the Haftoni village is known not only for its historical sites, but also the sanatorium of thermal waters, which began to operate here in 1958. In 2018, the Center of Hot Springs and Health opened in its place, where holidaymakers have the opportunity to undergo an intensive health course based on the natural thermal water Istisu from sources located in the Haftonian forests.

The complex, which covers approximately 11 hectares, includes a hotel, a medical center and various thermal baths. Currently, there are 12 active water sources in the Lankaran Hot Springs and Health Center, including 7 wells and 5 springs. According to the temperature of the water, the sources are grouped into isothermal, thermal and hyperthermal. Among the deposits of thermal waters, the advantage is sodium chloride-calcium waters, which are included in the group of waters with hydrocarbon and nitrogen gas. In addition, in the composition of thermal water are sulfate anions, potassium and sulfur. Waters of this type belong to the group of medicinal and mineral waters.

Talysh cuisine is very rich and diverse and includes a large number of dishes from rice, meat, fish, beans, greens, as well as mouth-watering sweets.

Among the most famous dishes of Talysh cuisine is lavangi. It is a poultry or fish stuffed with nuts, onions, sumach, cooked in the oven or tandir.

At almost any time of the year, you will find fresh fruit, vegetables and local herbs in Lankaran. Order any kind of national dishes in any restaurant and cafe in the area. For example, we can mention the Xan Lənkəran restaurant at the hotel of the same name, with a cozy green courtyard and gazebos, Boranı restaurant, etc.

On the market square of the city, not far from the mosque, there is a real oriental bazaar with its own color, noise, bustle and variegated colors. Here you can buy seasonal fruits and vegetables, herbs and spices. Private artisans offer their own products – pottery and copper dishes, knitted mats, baskets, etc. This is a great place to discover the compelling force of the authentic Oriental market.

In recent years, a large number of modern hotels of various classes has opened in Lankaran and other regions of Azerbaijan, which gives a big impetus to the growth of tourist flow.

The Starway Hotel (no stars) is conveniently located, so some of its rooms offer views of the sea or the city. Superior rooms have hydromassage baths. A flat-screen TV with satellite channels is provided. Near the hotel market, many shops, cafes and restaurants.

The Qafqaz Sahil Hotel (4 stars) is located on the Lankaran coast of the Caspian Sea. This unique place has gained popularity among visitors due to its proximity to nature reserves and national parks, as well as an amazing natural environment. The hotel In addition to hotel rooms, the complex has separate cottages. In the restaurant “Khazar” at the hotel, you can enjoy dishes of national and world cuisine. Finally, it is worth noting the hotel’s spa center, with separate saunas for men and women and a large fitness center equipped with modern sports equipment.

Built in the national style, Khan Lankaran boutique hotel (no stars) is located in the accessible part of the city, and is surrounded on the one hand by the Caspian Sea, on the other – by the emerald forests of the Talysh Mountains. This is the only hotel in the city, built on an individual project from environmentally friendly natural materials. Railings and benches are made of rare trees of the Talysh forests, everywhere there are old handmade carpets, oriental cushions, elegant dishes made of copper and earthenware. The cozy rooms of the hotel are equipped with LCD TV, air conditioning, shower or bath, heated floors, hairdryer, etc. In the hotel restaurant you can taste Lankaran dishes.

Palmalife Lənkəran Resort (no stars) is located in the village of Syutyamyurdov, at the foot of the Talysh Mountains, on the shores of the Caspian Sea. The modern and comfortable hotel rooms of this hotel are equipped with central ventilation and heating systems, LCD TVs, WiFi internet, long-distance telephones, safes and other amenities. It offers guests a swimming pool, fitness club and sauna. The hotel has facilities for playing football, tennis, basketball.

How to get to Lankaran

The city of Lankaran is located 282 km south of the capital of the country. From the Baku International Bus Station, daily buses run here. Here you can take a taxi.