Home / Uncategorized / Aliyev: Armenia must determine borders with Azerbaijan as conflict is over

Aliyev: Armenia must determine borders with Azerbaijan as conflict is over 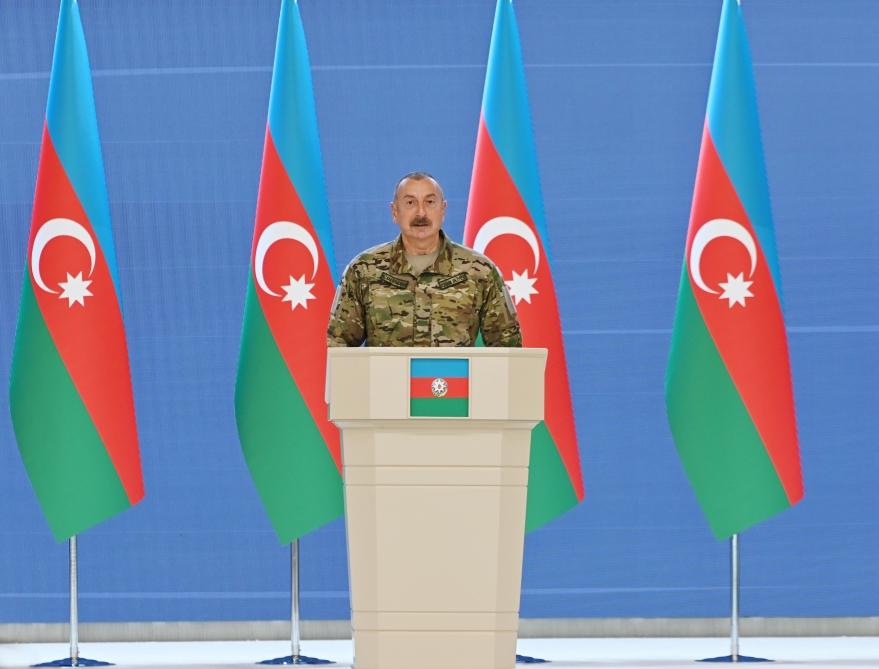 President Ilham Aliyev has said that the Nagorno-Karabakh conflict is over and Armenia must determine its borders with Azerbaijan, Azertag reported on June 26.

He made the remarks in an address at a meeting with the Azerbaijani army’s top brass and a group of servicemen on the Armed Forces Day held in Baku’s Gulustan Palace on June 26.

“I have said this many times and I want to say again that the Nagorno-Karabakh conflict has been resolved. Armenia must accept it and work with us to determine the borders. A working group on delimitation should be established. There must be preparations for a peace agreement,” Aliyev said.

He added that there is only one way for Armenia to develop – to establish normal relations with its neighbors, give up its territorial claims, and not to use the word Nagorno-Karabakh at all.

He said that Armenia must understand that Azerbaijan will continue to grow.

“Our military strength will increase as well. After the war, relevant instructions were given, new contracts were signed and the process of purchasing new weapons, equipment, and machinery based on modern technologies continue. The structural reforms of our armed forces have been approved,” he said.

Aliyev said that the number of Azerbaijani armed forces personnel will be increased.

“I can say that the number of our armed forces personnel will be increased. We will, of course, increase our military strength by properly analyzing the results and course of the second Karabakh war. Armenia, on the other hand, will not be able to restore not only its military power and its crushed army. If they do not renounce their hostile policies against us, they will have a very limited chance of restoring any economic activity. So we will continue to grow stronger,” he said.

The president stressed that the second Karabakh war showed the Azerbaijani army’s capabilities to the whole world.

“We have created such a strong army today that we can complete any task. Therefore, the provision of our army with modern equipment, regular training, the enhanced combat potential of our army, the creation of the military industry, and the reduction of dependence on imports to a certain extent – all this was part of our focused policy,” Aliyev noted.

He underlined the role of diplomacy, political relations, and economic opportunities in contributing to the country’s victory in the war.

Aliyev recalled a series of Armenian provocations before the war.

“The April [2016] fighting was not a lesson for Armenia. Two years later, as a result of the Nakhchivan operation, we took over a large area, demonstrating our strength and professionalism once again. That did not serve them as a lesson either. Finally, the second Karabakh war was a lesson that they will remember forever. The second Karabakh war is our glorious history,”  he noted.

The president stressed that the Armenian army was completely crushed during the war, losing a large number of military hardware.

Aliyev underscored that during the war the OSCE Minsk Group mediators sent a message to Armenia urging it to stop the operations and provide a timetable for the withdrawal.

“But they refused. After we had liberated Shusha from the occupiers, they were forced to sign an act of capitulation in the early hours of 10 November,” he said.