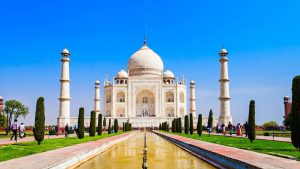 India and Azerbaijan enjoy close and friendly relations and have an active cooperation between them in many areas including political, commercial and investment, educational and cultural.

During the meeting, the sides exchanged views on the current economic relations between Azerbaijan and India and opportunities for expanding cooperation.

Minister Mustafayev underlined the importance of bilateral cooperation with India, mutual visits and meetings in the development of relations, the importance of the Intergovernmental Commission on trade, economic, scientific and technological cooperation between Azerbaijan and India, informed about the projects implemented with the participation of Azerbaijan, transit opportunities, including the North-South international transport corridor.

Pointing out that about 170 Indian capital companies operating in Azerbaijan, the minister invited Indian businessmen to benefit from the favorable conditions created in industrial parks and neighborhoods created in our country and to organize joint ventures.

Diplomatic relations between the two countries were established in 1992.

Bilateral trade turnover between the two countries increased by more than 60 percent in 2017 and reached $ 550 million, which included around $ 100 million of Indian exports to Azerbaijan and about $ 450 million worth of Azerbaijani exports to India. Azerbaijan imports many goods from India including pharmaceuticals products, engineering goods, automobiles and spares, agricultural and meat products and IT services.

India’s main import from Azerbaijan is crude oil. The volume of bilateral trade has significantly increased from about $ 50 million in 2005 to nearly $ 250 million in 2015 due to the commissioning of the Baku-Tbilisi-Ceyhan (BTC) oil pipeline. Indian company ONGC-Videsh is a stakeholder in the Azeri-Chirag-Guneshli (ACG) oil fields (2.72 percent) and Baku-Tbilisi-Ceyhan (BTC) pipeline (2.36 percent), acquired $ 1 billion worth of shares in these projects. India’s GAIL Limited has signed a memorandum of understanding with SOCAR for the joint realization of the liquefied natural gas capacities through liquefied natural gas supplies and the global promotion of liquefied natural gas projects.

Azerbaijan and India are working to sign a Bilateral Investment Treaty and Double Taxation Avoidance Agreement which would enhance the confidence of investors.

Indian companies are interested in developing mutually beneficial partnership in Azerbaijan, particularly in agriculture, IT and communications, healthcare, pharmaceuticals and education. India and Azerbaijan are also cooperating in development of International North-South Transport Corridor (INSTC) which will give big boost to trade and commercial exchanges in the region. India has developed the Chanbahar port in Iran, which began operating in November 2017, and this port will link Indian ports with Azerbaijan and other countries.

The 4th meeting of India-Azerbaijan Inter-Governmental Commission on Trade, Economic, Scientific and Technological Cooperation is scheduled to be held in October 2016 in Baku that would further provide a solid framework for their bilateral cooperation.

Azerbaijan is developing the non-oil sector and Indian companies are interested in using opportunities for non-oil sector development in such areas as agriculture, industry, pharmaceuticals and information technology.

India is very strong in pharmaceutical sector and our companies are keen to enhance their presence in Azerbaijan. Sun Pharma of India is building a pharmaceutical factory near Baku in a joint venture with Azerbaijani partners. Indian companies interested in many incentives provided by Azerbaijani Government for investors in Technology and Agro Parks.

India interested in cooperation with Azerbaijan’s Small and Medium Business Development Agency and AZPROMO, and considers that sending the Azerbaijani export mission to India would be important for the development of relations in the economic sphere.

The Indian Technical and Economic Cooperation Programme (ITEC), which offers training programs for Indian professionals and students across India, is a collaborative effort to increase knowledge and skills between India and Azerbaijan.