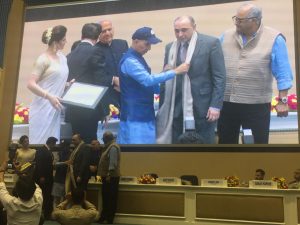 India’s International Media and Entertainment Industry Chamber hosted an event titled “Hindi Cinema Samman Samaroh” in Delhi on November 18.The event aimed to evaluate and reward contributions by renowned actors, directors, producers and composers to India’s film industry. Bolivian stars Zareen Khan, Sanjay Kapoor and his brother, producer Boney Kapoor, as well as many government officials, movie companies and media representatives attended the ceremony as honorary guests.The ambassadors of countries contributing to the development of Indian cinema industry and bilateral relations in this field were also awarded during the meeting.Azerbaijan’s Ambassador to India Ashraf Shikhaliyev was awarded by the organizers for the event held by the Embassy of the Republic of Azerbaijan in India.In this regard, it should be noted that this September, DVV Production shot a feature film in Azerbaijan and it is expected to be premiered soon.One of the leading film stars of India Ram Charan Teja starred in the film.Narimanfilm, a local partner, participated in the filming process.The development of relations with Bollywood and fast-growing South Indian movie companies is very important. Based on the experience of other countries, films with the participation of well-known cinematographers will make a positive contribution to the significant increase in tourism flows from India to Azerbaijan, and thus, to the further increase of the country’s budget.