Azerbaijan’s Army has participated in the military parade held in Moscow on June 24, on the occasion of the 75th anniversary of the Victory over fascism in the Great Patriotic War.

Led by Azerbaijan’s Defense Minister Zakir Hasanov, a delegation of the ministry attended the event as a guest of honour.

Together with representatives of other countries, a parade squad consisting of 75 military servicemen of the Azerbaijani Army took part in this parade.

During the victory parade, Azerbaijani servicemen performed a solemn procession with weapons made in Azerbaijan.

It was announced during the parade that over 600,000 Azerbaijanis had fought on the fronts of the Great Patriotic War.

The parade was attended by 14,000 servicemen. Along with Russian servicemen, servicemen from 13 countries were marching on Moscow’s square. 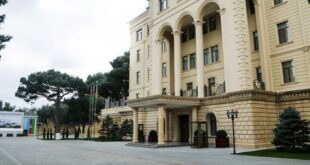