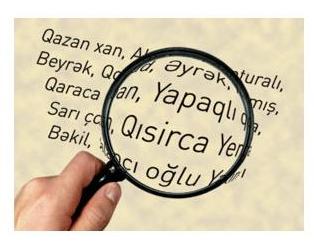 There are many traditions in Azerbaijan surrounding the naming of children and some of these stories and rituals go back a long, long way. The tales in the medieval epic Dede Qorqud tell us that in those days a boy would not be given a name until he was 15 years old or he had carried out a particularly outstanding deed. For example, one hero defeated and killed a wild bull and was then given the name Bughaj by the elder Dede Qorqud after the animal he had killed (bugha = bull). Another youth overcame brigands who had robbed some merchants. His father Baybore was naturally proud of his son’s actions and asked the merchants whether the deed was sufficient reason to name the boy. The merchants all agreed that it was more than enough and once again Dede Qorqud arrived to bestow a name, this time Bamsi Beyrek. This is how he based his decision: “You have until now cherished him as Bamsam, so I name him Bamsi Beyrek (Beyrek = young bey, prince) for his bravery worthy of a bey. In the epic there is an extraordinary creature, like a cyclops, called Tepegoz (= eye on the forehead). Meanwhile the warrior who killed this cannibalistic beast was called Basat. The epic tells us that this boy was lost as a child and raised by a lioness who fed him her own milk. Growing up among lions, this young man would attack horses and drink their blood. Thus Dede Qorqud named him Basat, meaning defeater of horses.

Thus we believe that in ancient times the given name surely reflected the person’s nature and deeds, the name would have meaning. According to the epic, names, especially for men, were given when they reached maturity. So, didn’t they have names before that? In fact the names given to children at birth were regarded as informal, while those earned later became their official names. This means that in the case of Bamsi Beyrek his real name was Beyrek, Bamsi is the unofficial name given by the parents. These names were generally used like nicknames and added to the official name.

From the very earliest times people were distinguished from one another by a characteristic name added to the official one. This additional name would refer to profession, personal trait, sometimes the tribe, or the father’s name. There are numerous examples in Kitabi-Dede Qorqud: Ulashoghlu Salur Gazan (Ulash’s son), Baybora oghlu Bamsi Beyrek (Baybora’s son), Beybajan gizi Bani Chichek (Beybajan’s daughter), Sari donlu Seljak Khatin (in yellow dress) etc.

This is generally true of all Turkic personal names. This goes back to the 8th and 9th century Orkhon-Yenisey inscriptions, the common cultural heritage of all Turks, including Azerbaijanis: Kuch Oge – Strong Wiseman, Cocuk Bori Shamiŋ – Small Wolf Warlord, Bilge Kaghan – Wise (knowing) Khakan (khan). There are also many names in the inscriptions including oghlu (son of): Yabghu oghlu Sebra, Bayna Samin oghlu Guluk Chur etc.

Just as in Kitabi-Dede Qorqud, the Orhon-Yenisey scripts indicate that a new name was given after a boy had reached a certain age, for example, of the ancient Turk Khakans, Gul Tegin was given his name when he was 10 years old…

A matter of honour….

Azerbaijanis have always held names in special respect as symbols of honour and dignity. They say of a baby let him grow with his name. If someone does something bad, they reprimand him with may your name turn out badly for you or may your name sink. Sometimes when a person promises something he may use if I don’t do this, I will change my name as an oath. One’s name has always been a source of pride, explaining such expressions as either the warrior himself or his name; a horse dies under his saddle, a warrior under his name. The importance of respecting one’s name explains the ancient proverb: The named is scared of his name; the nameless is not even scared of God.

We note that ancient Azerbaijani names were more ‘natural’, the first impression was decisive in naming a child. For example, a baby might be named Aghja (agh = white) if it was white skinned, Sari if yellow-skinned, and Gara if it was dark; Alagoz or Garagoz according to the colour of his eyes, Bulud (cloud), Duman (mist), Garyaghdi (it snowed) according to the weather at the time. Gozel, Goychek (both meaning beautiful), Aybeniz (moon faced), ‘Gulbeniz’ (flower faced) were given if the baby was exceptionally beautiful. These were among the earliest names given.

Our people also have certain beliefs when it comes to naming children. Until recently it was not acceptable to name children after living relatives, because this might harm the wellbeing of that person. Sometimes they would rename a child who was seriously ill, because the existing name was not bringing good fortune. A child born after an earlier child had died, would be given a name such as Dursun, Gelsin (let him stay), Yashar (living), Dayandur, Tokhtamish, Durdu (staying alive) to provide immunity. A child could even be given an ‘unfortunate’ or other names to divert jealous evil spirits and forces: Dilenchi (beggar), Yolchu (pauper), Chopur (pockmark), Gotur (itch, mange), Yetim (orphan), Tanriverdi (given by God), Faghir (poor), Balaja (small).

External factors and developments in the nation’s socio-political and cultural lives have also influence the formation of personal names. We may summarise the development of Azerbaijani personal names by historical period, as follows:
1) Pre-Islamic personal names. The most significant feature of the personal names of this period is that they were Azerbaijani-Turkic and were based on initial-natural motifs. With few exceptions, the names listed above are of national origin. We can also add to this list Astiag, Tomris, Garpag, Kir, Varaz, Adam, Isa (Jesus) among others.

2) The period following the adoption of Islam. The most significant feature of this period was that names taken from the religion and its revered figures became increasingly common among Azerbaijanis: As an example we can show hundreds of examples of men and women’s names such as Muhammad, Ali, Osman, Omar, Abubekir, Hassan, Hussein, Allahgulu (slave of Allah), Abdulla, Bashir, Abulfaz, Aladdin, Nasireddin, Fatima, Khadija, Aisha, Afet, Afag, Fakhriyya, etc. In this period some personal names of Turkic origin remained in use, however many Arabic and Persian words were also introduced as personal names even when they were not so used in their original language. These include men’s names such as Adil, Alim, Vali, Vidadi, Vugar, Gudrat, Abil, Intizam, Nasir, Panah, Ramazan, Rahim, Fateh, Fazil, Farid, Khalid, Khalil, Hijran, Hidayet etc. and women’s names Arifa, Afiyat, Vefa, Dilara, Zibeyda, Zarnishan, Leyla, Leman, Nurida, Ruhanghiz, Rahiba, Sakina, Tarana, Tahmina, Khuraman, Shafagat and others.

It is very interesting how and why the pseudonym (in Azerbaijani texellus, from xilas, originally Arabic, meaning escape) was created. Did people of culture and art ‘escape’ by using pseudonyms? It is well known that Arabic names reflected a person’s entire family tree: Ahmad-ibn Jafar-ibn Sadig-ibn Muhammad-ibn Hasan-ibn Amrullah-ibn Yusif. It was quite difficult to remember or write down. This is why a single word pseudonym came to be used; they could finally escape the long name form. Pseudonyms were often adopted together with the nisbe. An example was the celebrated poet of the 12th century Khagani Shirvani, whose full name was Abu Bedil Afzaleddin Ibrahim ibn ali Nejjar ibn Osman ibn Ibrahim Hegaighi Hessanul. The official name of the great poet now known as Nizami Ganjavi was Ilyas (given name) Yusif (patronymic) oghlu Zeki Mueyyed (grandfather’s name).

The people of Azerbaijan lived for most of the 13th century under Mogul-Tartar rule and traces remain in personal names. The modern names Chinghiz, Chighatay, Oktay, Tokay, Elkhan all reflect the influence of that period.

3) The Soviet era, 1920-90, may be regarded as the third stage in the development of Azerbaijani personal names. Its most significant impact was the tendency of Azerbaijani personal names to become more international and to reflect scientific and technical achievement. A range of names of Russian and European origin were added to the stock of personal names: new men’s names included Robert, Sokrat, Roman, Slavik, Yurik, Arthur, Marat, Sasha and women’s names such as Elmira, Indira, Aida, Emma, Isabella etc. Some explanations of the new influx of names are as follows:

Although most Azerbaijani personal names are of Turkic origin, they have influenced the formation of personal names in neighbouring countries, as evidenced by research into personal names in the Russian, Persian, Armenian, Georgian and Iberian-Caucasus languages. Azerbaijani personal names used in Georgian surnames include: Aslanidze (Aslan – lion), Begashvili, (Bey), Poladashvili (Polad – steel), Kichikashvili (Kichik – small) and Bugadze (Bugha – bull). Our personal names are most widely used in Armenian and not only because we have lived closely together. The reason lies in the Turkic-Albanian origins of the Armenians of Nagorno-Karabakh. The Caucasian Albanians resisted Islam, remained Christians and were eventually armenianised. However, their cultural roots, including names, have been preserved down the centuries. Hundreds of Azerbaijani first and family names remain in Armenian. Over time the names have also been armenianised by the addition of the Slavic ‘-ovich’ as patronymic and the Persian ‘-yan’ to indicate the surname: Dursun Sarikhanovich Tanriverdiyan, Chichek Nishanovna Atabekyan, Aghajanyan, Arzuman-yan, Demirchiyan, Kocheryan, Babayan, Sardaryan, Amiryan, Atayan, Alikhanyan, Garibyan etc.

About the author: Kamil Kamal oghlu Bashirov is assistant professor at the Azerbaijan State Pedagogic University, expert in anthroponomy and toponomy, author of several books and articles on these subjects.