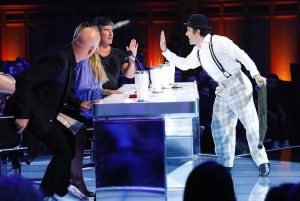 Azerbaijan’s circus artist Uzeyir Novruzov once again conquered the hearts of many people during the show with his famous ladder.

The finalist of “America`s Got Talent” Uzeyir Novruzov  took part in America’s Got Talent: The Champions, Trend Life reported.

Circus artist participated in the show America’s Got Talent in 2015, but could not win because of falling from the ladder during the performance.

“One of the reasons I wanted to return to the show, was to inspire viewers to conquer their fears,” said Novruzov.

On the first day of the America’s Got Talent: The Champions, Novruzov presented a challenging performance, forcing the audience and the jury of the project to watch his number  with a sinking heart.

In 2017,  Uzeyir Novruzov  joined “Georgia’s Got Talent”. His unique talent was highly praised by judges.

Also known as the “free ladder man”, Uzeyir was born in Azerbaijan’s region of Ganja, but at the age of 10 he moved to Russia.

He is called Azerbaijani Charlie Chaplin, because of his close resemblance to the English comic actor, when dressing for his performances.

The longest duration balancing on a 6 m ladder is 7 minutes and 15 seconds and was achieved by Uzeyir  on the set of CCTV – Guinness World Records Special in Beijing, China on January 7, 2016.

Uzeyir Novruzov  has performed his astonishing ladder act in front of more than 1,000 viewers across the world. Most of his life, he has toured with many famous circuses all over the world.

He moved to the U.S. in 2002, where he was featured in the Big Apple Circus’s production of Dreams of a City. He also appeared with his free ladder act in “Cirque du Soleil’s: Corteo”  touring production.