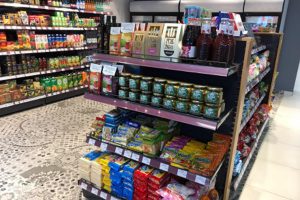 “Presently, markets and demand are being considered,” he said.

“It is early to talk about this issue now,” Nagdaliyev said. “However, there is a desire and it must be comparable to real possibilities and necessity. We are currently working on a trade house in Warsaw. At the same time, markets of Croatia, the Czech Republic and Germany are being considered.”

“The International Green Week 2019 will be held in Berlin on Jan. 18-27,” he said, adding that Azerbaijani products will be showcased.

“Participation in such events helps us promote our products,” Nagdaliyev said. “Of course, high quality and competitive prices are important components of our products.”

Azerbaijan’s trade house in Warsaw opened in early December 2018. The trade house presents products under the “Made in Azerbaijan” brand in the Polish market, supports the promotion and expansion of exports of Azerbaijani goods, sells products in Poland, etc.

“The opening of a trade house is a very good mechanism for promoting our products in Poland,” Nagdaliyev said. “This is a good platform for people, businessmen and media representatives to review our products, which are not yet available in the Polish market. Work is underway to attract distributors and buyers.”

The first Trade House of Azerbaijan opened in Minsk, Belarus capital in 2017. At present, trade houses are operating in Russia, Ukraine, Belarus, Latvia, Poland and China. It is planned to open up to 10 Commercial Houses in 2019.

The Made in Azerbaijan brand, launched by the decree of President Ilham Aliyev dated November 5, 2016, envisages a large-scale promotion of local non-oil products in foreign markets. The brand is highly successful in regional and world markets, and Azerbaijan’s local output meets all the necessary standards.

Previous Azerbaijan may arrange deliveries of solar panels to Germany
Next Expert: 2019 to be successful for dev’t of transport sector in Azerbaijan