Digitalization may become one of drivers of development of Azerbaijani banks 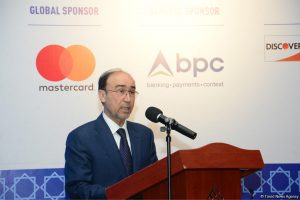 Digitalization may become one of the drivers of the development of the Azerbaijani banking system, Zakir Nuriyev, chairman of the Azerbaijan Banks Association, said at the 3rd International Banking Forum in Baku on Nov. 15.“This will increase trust between investors and banks and ensure transparency in the sector,” he said.Nuriyev said that banks spent approximately 310 million manats (eight percent of non-interest expenses) to implement financial technologies in 2012-2017.“Digitalization requires big investments from banks,” he said. “The banks will receive big income over the medium term. In 2010 the volume of transactions on interbank payments amounted to 85 billion manats, while 2017 this figure was 210 billion manats. This figure is expected to reach 255 billion manats by the end of this year.”Nuriyev also touched on the indicators of the banking sector for the first nine months of 2018.Thus, in January-September 2018 the total assets of banks increased by 4.6 percent and reached 29.2 billion manats, the loan portfolio – by five percent to 11.9 billion manats, capitalization – by 11 percent to 4.1 billion manats, deposits of the population – by 8.4 percent to 8.2 billion manats compared to January-September 2017.The two-day 3rd International Banking Forum “Non-cash Economy: Transition from Traditional to Digital Banking”, organized by the Central Bank, Azerbaijan’s Financial Market Supervisory Authority (FIMSA), the Center for Analysis of Economic Reforms and Communication and the Azerbaijan Banks Association, kicked off in Baku on Nov. 15.About 100 representatives of local and foreign financial organizations of Europe, the US, Japan, China and the CIS, including Citibank, Commerzbank AG, Yandex.Money, Raiffeisen Bank International AG, Deloitte, Standard Chartered Bank, Moody’s Investors Service and others, participate in the event.