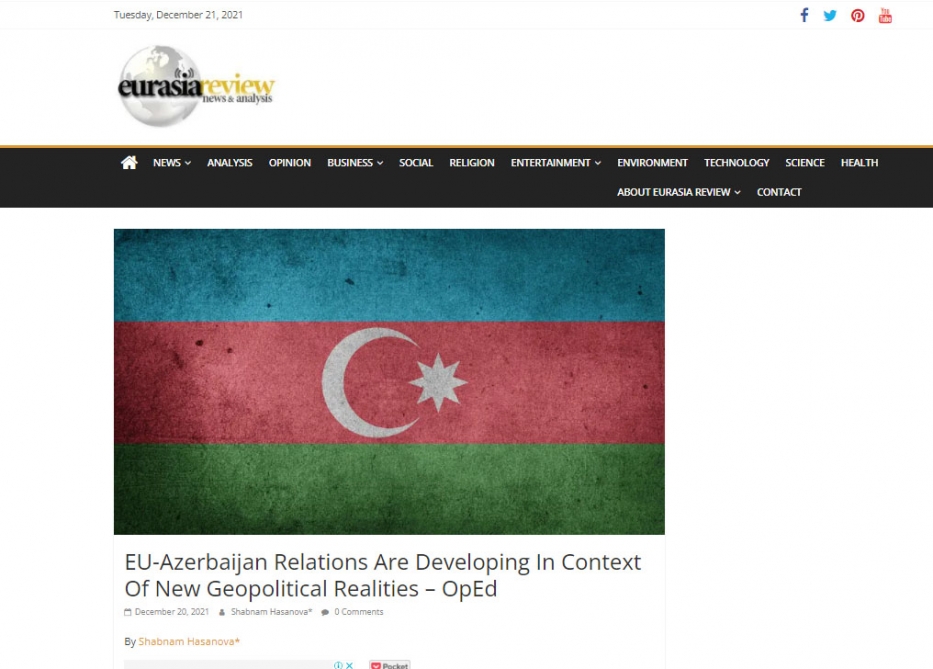 The article reads: “As Azerbaijan’s victory in the 44-day war over Armenia has led to significant changes in the region, EU-Azerbaijan relations also need to be reconsidered in the current reality. It should be emphasized that the victory has laid a solid foundation for stability, cooperation and sustainable security in the region. In the post-war period, Azerbaijan has been characterized as a country that pursues constructive policy, ready to engage with all parties, negotiate on an equal footing and open to initiatives to establish peace in the region, define borders and sign a peace agreement.

Given the fact that each of the South Caucasus countries has different approaches and actual steps to develop relations with official Brussels, official Baku preferred to establish relations with the EU not on the basis of associative membership, but on the logic of equal, mutually beneficial cooperation. This is confirmed by the signing of strategic partnership documents between Azerbaijan and nine EU member states. One third of EU member states consider Azerbaijan a strategic partner. Speaking at the Sixth Eastern Partnership Summit in Brussels on December 15, President Ilham Aliyev said that more than 90 percent of the work on a new partnership agreement between Azerbaijan and the European Union has been completed. President Ilham Aliyev added that he hoped the rest of the document would be finalized as a result of negotiations in the coming period.

One of the main directions of the partnership between the Republic of Azerbaijan and the European Union is energy security. The signing of the “Joint Declaration” on the Southern Gas Corridor between the European Union and Azerbaijan in Baku in 2011 provided wider opportunities in relations. Despite the actual war in Azerbaijan, the fourth and final segment of the project, the Trans Adriatic Pipeline, was commissioned shortly after the war, on December 31, 2020. Azerbaijan took the main financial burden in all the four segments of the Southern Gas Corridor.

TAP can stimulate gas supplies to Southeast European countries through interconnectors to be built in the future. Bulgaria, once dependent on a single gas supplier and experiencing major problems due to gas shortages, has the opportunity to strengthen supply security by providing 33% of its natural gas needs through TAP. Countries that are not currently involved in the Southern Gas Corridor project have expressed their intention to join the project and Azerbaijan is also positive about this issue.

President Ilham Aliyev has repeatedly stated that as there is no gas and price crisis or freezing in the countries supplied with Azerbaijani gas, and the Southern Gas Corridor serves not only the mission of diversification of routes, but also sources, it is a real energy security project. Azerbaijan, along with the European Union, has been chairing the Southern Gas Corridor Advisory Council for many years. During the ten months from January 1 to October 31, 2021, Azerbaijan exported more than 14 billion cubic meters of natural gas via this route to five countries – Turkey, Georgia, Italy, Greece and Bulgaria. About half of this volume was used by EU consumers. Next year it will be 9 billion, and in 2023 at least 11 billion cubic meters.

One of the primary issues on the EU-Azerbaijan agenda is undoubtedly the normalization of relations between Armenia and Azerbaijan. It was the first time during the post-war period that discussions between the President of Azerbaijan and the Prime Minister of Armenia took place on December 14 on the initiative of Charles Michel, President of the European Council and President Ilham Aliyev described the meeting as practical and thorough in a constructive atmosphere. When President Ilham Aliyev was asked “What would you say this EU trilateral contact in Brussels differs from the last meeting in Sochi?” in an interview with the Spanish newspaper El Pais in Brussels on December 14, the President replied that “Practically speaking, I don’t see any differences, because I see Russia and the European Union’s genuine desire to help normalize relations between the two countries. Otherwise, they wouldn’t spend time with us and spend hours in these negotiations.”

The most important part of Charles Michel’s statement on the results of the meeting was that Michel called for the elimination of the conflict legacy between Armenia and Azerbaijan. The Azerbaijani side has repeatedly stated that the conflict is over, it is time to turn the page and look into the future.

Another special factor is the call for the signing of a comprehensive peace agreement between Azerbaijan and Armenia and the fulfillment of obligations undertaken in the framework of the two trilateral statements of 9 November 2020 and 11 January 2021 and understandings reached in Sochi on 26 November 2021.

The statement also expressed support for humanitarian demining efforts. On July 18 2021, during his official visit to Baku, Charles Michel said at a press conference that EU was ready to provide European expert assistance in delimitation and, if necessary, European monitoring. Michel added that the partnership between the European Union and Azerbaijan is not based on financial support. On the contrary, it is a partnership based on the desire to work together, innovation, technological exchanges and economic cooperation. Two issues here need to be analyzed in detail.

The European Union is Azerbaijan’s main trading partner. At present, almost 40% of Azerbaijan’s trade is with the European Union. Last year’s trade turnover was almost $ 9.5 billion. Azerbaijan’s exports to EU member states amount to $ 6.8 billion. More than 1,700 companies from member states operate in Azerbaijan. Brussels is interested in cooperating with Azerbaijan as an equal partner in modern development areas. Azerbaijan also continues to work closely with the EU and is an active participant in the digital transition including Ukraine, Georgia and Moldova. The second issue is that while the EU allocated 3.9 billion euros to Georgia and 2.6 billion euros to Armenia, it allocated substantially less, 140 million euros to Azerbaijan. In an interview with the Italian “Il Sole 24 Ore” newspaper in Brussels, the President of Azerbaijan commented on this issue: “It was a very unpleasant surprise for the people of Azerbaijan. About 1 million mines have been planted there. The process of clearing mines is very costly and takes a lot of time. There is no destruction in Armenia. This country was not occupied, it was an occupier. Even physically, the Armenian economy cannot absorb this huge package. At the meeting with Charles Michel, I even suggested the European Commission to look at the opportunity to finance from the funds demining in Azerbaijan. I told them not to give us the money, but to provide financial assistance to European mine clearing companies so that they could come to Azerbaijan and start working. Our position is that the level of financial contribution to Armenia, whether it is a donation or a loan, should be the same as in Azerbaijan.”

In Charles Michel’s statement there was very important point for Azerbaijan. Given that the fate of more than 4,000 people missing by Azerbaijan during the First Karabakh war is still unknown, for the first time the issue of missing persons has been included in the EU agenda and the need to clarify their fate has been highlighted. It is also important that the EU expresses its support for the rehabilitation and reconstruction work carried out by Azerbaijan in the liberated territories. Because so far, Azerbaijan has done all the work at its own expense. At the same time, the organization said it would support the demarcation and delimitation of borders in a consultative capacity. The EU has even expressed its support for the creation of communication infrastructure in the region, the opening and development of communication lines between countries, by supporting these projects through economic and investment resources. This approach and points show that Azerbaijan’s political agenda coincides with the EU’s position.

Adhering to the principles of humanism, Azerbaijan handed over to the Armenian side on December 19, 2021, through the European Union, 10 servicemen of Armenian origin, detained while preventing the provocation committed by the Armenian armed forces on November 16, 2021 in the direction of Kalbajar.

The relations between the EU and Azerbaijan are developing in the context of new geopolitical realities emerging on a regional and global scale. Azerbaijan is the only member of the Eastern Partnership that has been consistent for many years. At the heart of this successful position of the Azerbaijani state is the line of mutually beneficial cooperation established on the basis of equal partnership in the status of an independent state. Experience shows that the position of the Azerbaijan is promising, realistic and, most importantly, effective.”