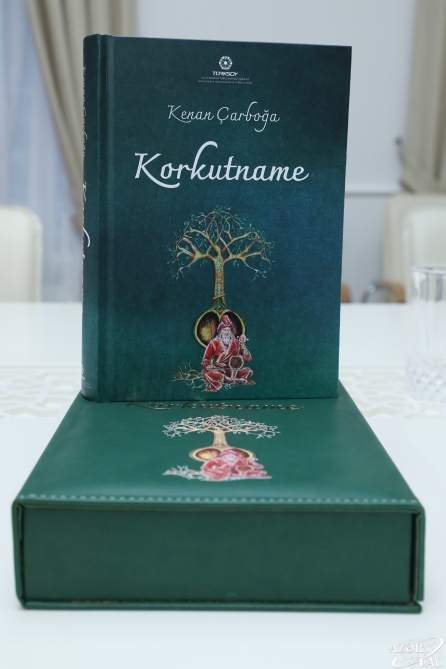 The International Turkic Culture and Heritage Foundation has hosted the presentation of the book “Korkutname” by the national poet of Turkey Kenan Charbogan, published by TURKSOY.

The book was written on the basis of the epic “Kitabi-Dede Gorgud”, which is considered the common heritage of the Turkic world.

In her opening remarks, President of the International Turkic Culture and Heritage Foundation Gunay Afandiyeva said that the building of the organization was allocated for permanent use by a special decree of the President of the Republic of Azerbaijan Ilham Aliyev. Gunay Afandiyeva noted that the official opening of the building took place on October 14, 2019 within the framework of the VII Summit of Heads of State of Turkic-speaking countries with the participation of foreign ministers of member and observer countries of Foundation and heads of Turkic-speaking international organizations.

Gunay Afandiyeva congratulated the participants of the event on the historic victory gained due to the return of the ancestral lands of Azerbaijan and emphasized that this victory gave a sense of pride not only to Azerbaijan, but to the entire Turkic world as a whole. She also noted that at the end of last year she visited Fuzuli and Aghdam regions of Azerbaijan liberated from occupation.

The President of the Foundation mentioned that the heads and members of the delegation of the Turkic Council, TURKSOY, the International Turkic Culture and Heritage Foundation visited Fuzuli and Aghdam districts of Azerbaijan liberated from occupation. Gunay Afandiyeva stressed that the historical cities and ancient cultural centers of Azerbaijan – Aghdam, was the victim of Armenian vandalism, and Fuzuli was completely destroyed.

The President of the Foundation noted that the preliminary presentation of the book “Korkutname” was held in the city of Fuzuli. Secretary General of TURKSOY Dusen Kaseinov presented the book to the Foundation on the occasion of the liberation of Fuzuli from the occupation. “Thus, the International Turkic Culture and Heritage Foundation is the organization that first set foot on these ancient lands of Azerbaijan at the senior level, and TURKSOY was the organization that held the first presentation there,” Gunay Afandiyeva said.

Afandiyeva highlighted that the presentation of this book in Fuzuli has a symbolic meaning, once again demonstrating through the advice of Dede Gorgud, which personifies the unity of the Turkic world, the solidarity of the two fraternal organizations. “The preface to the book belongs to the President of Turkey Recep Tayyip Erdogan, and this once again shows that Turkey is always close to Azerbaijan,” Afandiyeva said.

Speaking at the event, Minister of Culture of Azerbaijan Anar Karimov congratulated President of the International Turkic Culture and Heritage Foundation Gunay Afandiyeva and Secretary General of TURKSOY Dusen Kaseinov on the organization of such an important event and emphasized its symbolic significance.

In his speech, the Minister of Culture noted that the year 2020 was the most memorable and significant in the history of statehood of both the independent Republic of Azerbaijan and the Azerbaijani people. He also noted the restoration of Azerbaijan’s sovereignty, ensuring its cultural and geographical integrity.

Anar Karimov said: “It is no coincidence that the form of expression of the history of Turkic folklore is precisely the epic. In the just struggle of Azerbaijan in the second Karabakh war, the entire Turkic world led by the Republic of Turkey, showed moral solidarity. This year in Karabakh, which will be restored, we will hold the Vagif poetry days and we especially invite our dear poet Kenan Charbogan to this literary festival. The book “Korkutname”, written by Kenan Charbogan and published with the support of TURKSOY, is one of the most important books that have been published over the past 10 years. “Dede Gorgud” is a literary monument of Azerbaijan and all Turkic peoples in general. This epic is a very reliable and worthy source in the manifestation of our history and national identity.”

The minister recalled the words of the great leader Heydar Aliyev about this epic: “Kitabi-Dede Gorgud” belongs to the entire Turkic world. Its Motherland is Azerbaijan, and the owner is the Azerbaijani people”

It was noted that in accordance with the Order of President Ilham Aliyev on monumental sculptures, memorial and architectural complexes in Azerbaijan, signed in 2007, the Dede Gorgud park was laid in Baku on an area of 6 hectares, and a monument to Dede Gorgud was erected in the center of the park. In 2018, the heritage of Dede Gorgud , presented jointly by Azerbaijan, Turkey and Kazakhstan, was included in the UNESCO Representative List of Intangible Cultural Heritage as an example of a multinational culture of folklore, folk tales and music.

The versification of the 12 stanzas of the epic by Kenan Charbogan is a worthy contribution to Turkic culture. The fact that Kenan Charbogan devoted 10 years of his life to this work shows his respect and love for our artistic heritage, as well as his dedication to his origins as a writer.

At the end of his speech, Anar Karimov thanked everyone who contributed to the publication of the book.

Secretary General of TURKSOY Dusen Kaseinov congratulated the participants on the Glorious Victory and noted that he was glad to see each of them at the presentation of the book ” Korkutname “. The Secretary-General expressed great satisfaction with the ceremony held in Baku, the capital of the fraternal Republic of Azerbaijan, at the International Turkic Culture and Heritage Foundation. Speaking about the book, Dusen Kaseinov stressed that the widespread epic of the entire Turkic world “Dede Gorgud”is one of the richest literary treasures.

Speaking at the event, Chairperson of the Committee on Culture of the Milli Majlis Ganira Pashayeva, Chairperson of the Azerbaijan Writers Union, People’s Writer Anar, Ambassador of Turkey to Azerbaijan Erkan Ozoral, Rector of the Azerbaijan University of Languages, People’s writer Kamal Abdulla, Deputy, Head of the Ataturk Center, Academician Nizami Jafarov and Director of Azerbaijan National Library Karim Tahirov spoke about the significance of holding such events, shared their views on the historical monument Kitabi-Dede Gorgud, and also noted the importance of further research in this direction and attracting youth towards deeper in this area. 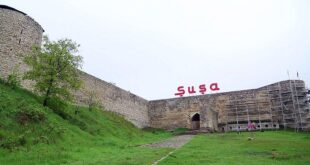 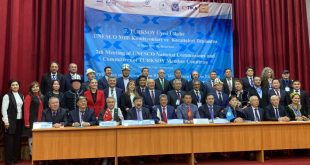