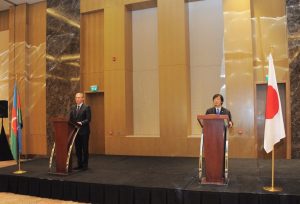 The Embassy of Japan in Azerbaijan has hosted a reception to mark Emperor’s birthday here.After the national anthems of the two countries were played, Ambassador Teruyuki Katori noted that under the Constitution the Emperor is the symbol of the unity of the Japanese people, and his birthday is celebrated as a national holiday.Highlighting relations between Azerbaijan and Japan, the ambassador said that ties between the two countries have been steadily developing over the past period. He recalled Japanese Foreign Minister Taro Kono’s visit to Azerbaijan and his high-level meetings with Azerbaijani officials. Teruyuki Katori pointed out that the Japanese government is interested in developing cooperation with Azerbaijan. The ambassador added that the bilateral cooperation in political, economic, educational and cultural areas, as well as within international organizations has deepened.On behalf of the Azerbaijani government, Minister of Ecology and Natural Resources Mukhtar Babayev congratulated the people of Japan on the national day. The minister said that Azerbaijan is ready to explore opportunities for cooperation with Japan in every field.Expressing gratitude to the Japanese government for the projects implemented in Azerbaijan, Mukhtar Babayev underlined that the two countries are actively cooperating in various areas. The minister expressed confidence that relations between the two countries will continue to strengthen.The event brought together Azerbaijani officials, MPs, diplomats, journalists and public figures.