Home / Business / Over half of Azerbaijan’s exports accounts for industrial sector: minister

Over half of Azerbaijan’s exports accounts for industrial sector: minister 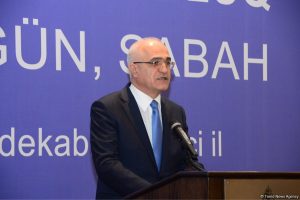 He said that over the past 15 years, two million new jobs have been created in Azerbaijan, and 75 percent of them accounted for districts.

“More than 70 residents of industrial parks invested over $5 billion in Azerbaijan’s economy,” he noted. “The share of the private sector in GDP last year was 84 percent. Its share in the employment was 76 percent. The total value of investments in the country’s economy over the past 15 years reached $250 billion, half of which accounts for foreign investments.”

Over 60 percent of investments accounted for the non-oil sector, the minister said.

The value of Azerbaijan’s foreign trade during the period increased 5.3 times and the value of non-oil trade grew 4.1 times, he added.