Organized by the Nizami Ganjavi International Center under the patronage of President Ilham Aliyev, the 9th Global Baku Forum under the motto “Challenges to the Global World Order” has today kicked off, Azernews reports citing Azertag.

President of the Republic of Azerbaijan Ilham Aliyev attended the opening ceremony of the Forum.

First a photo was taken.

My name is Ismail Serageldin and I am a co-chair of the Board of Trustees of the Nizami Ganjavi International Center. We are very honored to welcome you to this opening session of the 9th Global Baku Forum. It is my great privilege in this initial session to ask His Excellency President Ilham Aliyev, President of the Republic of Azerbaijan, to take the floor for opening a key note address to this ninth Global Baku Forum and with that the forum will be started. Your Excellency.

The head of state made a speech at the opening ceremony.

I welcome you all and wish to express gratitude for being with us today. The 9th Global Baku Forum opens today and I am sure that the discussions as always will be very productive, because we have a great audience. Members of the Nizami Ganjavi International Center and the guests participating in the forum I am sure will contribute to very open and sincere discussion on the most urgent issues on global arena. And I am sure that discussions and also exchange of views will help to elaborate new approaches towards the resolution of the issues which are on the top of global agenda. During its activity the Nizami Ganjavi International Center transformed into one of the leading international institutions addressing global issues and managing to embrace broad international community. We met yesterday with the members of Board and I was informed that at the 9th forum we have high-level representatives from almost 50 countries. This is much more than a year ago. So, this demonstrates the attractiveness of our discussions. This demonstrates that this platform is needed and it’s very useful. It has a very important practical impact and I am sure what will be discussed these days in Baku and also in Shusha on Sunday will be important for decision-makers. Because elaboration of new approaches is needed today maybe as never before. I’d like to express gratitude to the co-chairs of NGIC Madame Vike-Freiberga and Mr. Serageldin for their outstanding contribution to the transformation of the Center and the Global Forum which I think now in the top list of international fora. Also I would like to express gratitude to all members of Board for their active role in this transformation. When I talk about new approaches, it’s clear that the world has changed since we met last November here in Gulustan Palace. The change is fundamental. We have so far unpredictable consequences, but it’s clear that the world will be different, and it is already different. Therefore discussions, exchange of views, sometimes contradictions of different opinions, that’s what is needed in order to elaborate new approaches. Every country, of course, should contribute to that, first of all, with respect to security measures, because issues of security now become the top issue on international agenda. At the same time, I’m sure that open discussions about the current situation in Europe is needed. The Global Baku Forum is an excellent platform for that. It’s an inclusive forum which accumulates opinions from different sides and I think that’s how it should be. Because we all need to work closely in order to make the world safer and more secure. At the same time, also I am sure that one of the issues on the agenda is what will be the role of leading international institutions, what will be the role of leading financial institutions in coping with food crisis, because it is inevitable and it is already next door and international organizations and leading countries also should take care of situation with potential growth of migrants which will be a consequence of food crisis. If we add here the situation on the energy markets which is a very unpredictable and which also leads to disparity between producers and consumers and this is a risk also for producers. If somebody thinks that countries-producers of oil and gas are very happy with these high prices, it’s a wrong assessment. The balance of interest between producers, consumers stable market, that’s what producers really need and the efforts of OPEC plus where Azerbaijan actively participates were aimed at that.

So, all these are new challenges. What I am saying now is absolutely different from what I was saying six months ago sitting on this place. It shows that everything can change, everything changes and nothing is stable. Of course, as President of Azerbaijan I work on the issues related to security of our country and resolution of the Karabakh conflict, I think, is an opportunity for security in the region, for peace in the region. Last time when we met I broadly covered the issue related to occupation, devastation and humanitarian crisis which our people suffered for almost 30 years. I don’t want to repeat that. It is known already, because there are so many visitors to the liberated territories-politicians, public figures, journalists, representatives of civil society and they see all with their own eyes what ruins were left after Armenian occupation. I am grateful to Nizami Ganjavi International Center that last year they organized one session in Shusha and we had an opportunity to meet there. I was actually working as kind of a guide to our guests showing them the situation. Therefore, I want to express our approaches to post-war situation, to situation related to post-war security in the Caucasus. Azerbaijan won the war. The war was just, the war was inevitable and it led to restoration of justice, international law, and national dignity of Azerbaijani people. Now we talk about peace. I think it’s one of the unique cases in the world that after such a long-lasting confrontation within a short period of time the country which restored justice and defeated aggressor offers peace. If you look at the history of wars not in many cases one can see this picture. But why we select peace, because we want stable, sustainable development in the Southern Caucasus. It’s a unique opportunity. Southern Caucasus was disintegrated throughout the years of independence of three countries of Southern Caucasus. For thirty years it was disintegrated because of Armenian occupation. So, now it’s time to establish peace, establish cooperation. And Azerbaijan is working on that. With respect to process of normalization of relations with Armenia, we suggested, it was our proposal to start working on peace agreement. Armenia did not respond. Then we made another step, we put forward five basic principles of international law, including mutual respect to and recognition of territorial integrity of both countries and mutual refrain from any territorial claims now and in the future, and other principles which make the bulk of our proposal. We were glad to see that the Armenian government accepted this five principles. So this is positive dynamics but now we need to move to practical implementation. Because we know from the history of times of occupation when we were negotiating that sometimes words even on high-level articulated by Armenian officials do not mean a lot. Because we need steps. Azerbaijan already on its side established Azerbaijani commission on peace agreement and we expect the same to be done by Armenia. As soon as it is done, or if it is done, then negotiations will start. We also put forward a proposal to start the process of delimitation of our border. Because biggest part of our border was also under occupation and never a delimitation took place. Therefore, this process also have started and the first joint meeting of the border commissions of Azerbaijan and Armenia took place last month on the border. That was also symbolic that both sides met on the border and that was also an important message that there will be progress. Of course, we understand that it’s a long way but it started. At the same time, we expect that Armenia will comply with the trilateral Declaration signed on 10 November 2020 with respect to the opening of communications for Azerbaijan to have connection with its Autonomous Republic of Nakhchivan. Unfortunately, it’s more than one and a half year since Armenia signed a capitulation act, but so far there is no access. And this is unacceptable. First, this is a violation by Armenia of the provisions of trilateral Declaration, and it also creates a kind of imbalance in the region, because based on the same declaration, Azerbaijan undertook obligation to provide unimpeded access from Armenia to Karabakh region of Azerbaijan where Armenian population lives. So for one year and a half Armenians are using Lachin road to have this unimpeded connection, but Azerbaijanis cannot use the road through Armenia-Zangazur corridor to connect us with Nakhchivan. This is not fair and this is not just. We will never agree with that. 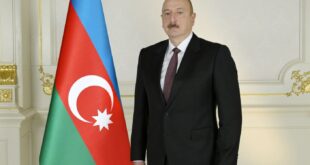