Home / featured / Turkey and the South Caucasus: Prospects and Challenges for Cooperation

Turkey and the South Caucasus: Prospects and Challenges for Cooperation 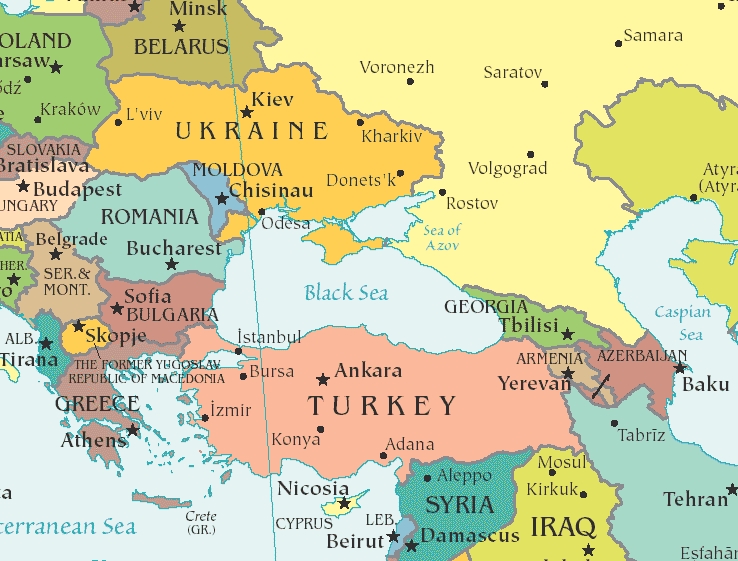 The South Caucasus is a diverse geopolitical region, which occupies a strategic point in the transport of Caspian oil and gas. However, the region is often challenged with unresolved conflicts and socio-political and economic problems brought about by the collapse of the former Soviet Union. Turkish relations with the South Caucasus states are rather divergent and characterized by promoting national interest in the region while balancing Russia’s core regional interest. Turkey maintains close links with Georgia, which is predominantly focused on economic matters and abstains from taking Georgia’s side in the uneasy relationship with Russia. Its relationship with Armenia is difficult considering history and the absence of diplomatic relations with closed border and no bilateral trade or travel.

By contrast, Turkey’s links with Azerbaijan have always remained extremely close since Azerbaijan perceives its neighbor as a natural strategic partner, which Russia does not object as far as its military-strategic interests are not directly challenged. Turkey’s interest in the South Caucasus is to keep regional security and stability. However, Turkey’s new “zero-problems” policy seems to be restricted by several issues: Russia’s volatile relationship with Georgia; the implications the Nagorno-Karabakh dispute between Armenia and Azerbaijan, and Iran’s exploitation of the Caucasus in its proxy war with Israel. In the presence of rapidly changing economic and political situation in the region, it is essential to examine the future prospects and challenges of Turkey’s relations with each of the countries of the South Caucasus while considering the intractability of other big players in the region.

Over the last 10 years, Georgian relations with Turkey have greatly improved on economic, political and geopolitical fronts. Georgia is a critical strategic link between Turkey and Azerbaijan – bringing Caspian oil to Europe and challenging Russia’s current stranglehold on energy resources. The Baku-Tbilisi-Ceyhan oil pipeline and Baku-Tbilisi-Erzurum natural gas pipeline represents a step forward in this cooperation, especially combined with the upcoming TANAP (the Trans-Anatolian pipeline) and Baku-Tbilisi-Kars Railway. Close economic integration of these two countries in the last decade has been aided by a visa-free travel regime and free trade agreement signed in 2007. Turkey also ranks in second place after Azerbaijan in FDI in Georgia. Georgia-Turkey relations have significantly progressed in the last decade, however there are some issues, which need more public discussion and engagement from both Ankara and Tbilisi.

The first issue is the factor of Russia and its continuing influence in the region. The August 2008 conflict in Georgia has once again demonstrated that Russian military intervention remains a credible threat. Turkey is a NATO member and security in its neighborhood is in its core interest. However, due to certain economic and political reasons there has been less effort from Turkey to actively contribute to security in the South Caucasus. One reason for this is that Turkey is cautious about stepping on Russia’s regional interests. The conflicts between Armenia and Turkey and Armenia and Azerbaijan also hampered Turkey’s presence in the region. However, we can assume that Turkey can counterbalance Russia and might be construed as a part of an overall strategy of integration into Europe of the South Caucasus.

The second question is Turkish interaction with the breakaway region of Abkhazia. The latter has been consistently on the agenda of Tbilisi-Ankara relations. There is big Diaspora of Abkhaz in Turkey that lobby for Abkhazia- friendly policies and they are also active in requesting direct travel links between Trabzon and Sukhumi. Turkey recognizes Georgia’s territorial integrity but at the same time in practice there are ships carrying cargo from Turkey to Abkhazia. This creates another dilemma for policy makers. One part thinks that this might reduce Abkhazia’s dependency on Russia while others estimate this as legitimizing the separation of Abkhazia. Another issue on the agenda between Tbilisi and Ankara is the repatriation of Meskhetian Turks to Georgia. While Tbilisi formally agrees to their return, the implementation has proven challenging. One reason is that the current population of the Meskhetian homeland is ethnic Armenians who perceive this region as part of an Armenian historic homeland.

Considering the above-mentioned points, the deepening of economic and strategic relations between Turkey and Georgia needs to be accompanied by an intellectual and grassroots dimension, incorporating strong societal linkages, better understanding of each other’s internal dynamics and more awareness of respective historical sensitivities. Turkey has an opportunity to turn its strong economic presence in Georgia into a more effective soft power and public relations tool. More knowledge about Georgian internal dynamics could be useful to this end. More generally, Turkish civil society — including academia, media, think tanks, and NGOs — can help intensify interaction and mutual knowledge between Turkish and Georgian societies.

Modern Turkish-Armenian relations have been frozen ever since the Nagorno-Karabakh conflict of the early and mid nineties. Speaking in pure logistical terms, Armenia presents the most direct route for Caspian hydrocarbons to transit to Turkish and European markets. There is an existing rail link from Kars to Gyumri that continues on to Tbilisi and Baku. The construction of the Baku-Tbilisi-Kars railroad is essentially a bypass route, and demonstrates that the countries of the region have little faith in Turkish-Armenian rapprochement. Armenia has already been excluded from gas and oil transit corridors, and risks future economic woes if it refuses to compromise on the Nagorno-Karabakh issue.

Turkey has been linking the normalization of relations with Armenia with progress in the Karabakh conflict that would favor its regional ally Azerbaijan, thus triggering a rejection of both Armenia and Western countries. It is now difficult to predict what the developments in Turkey will lead to and what impact they will have on neighboring Armenia. But it is obvious that Yerevan will have to be willing to participate in regional projects and be more open for future cooperation and not stay isolated.

Despite Azerbaijan’s relative small size and population, it wields a disproportionate amount of influence in Turkey. In 2010 it managed to put a stop to Turkey’s normalization process with Armenia, and refused to allow the issue to be decoupled from the Nagorno-Karabakh settlement process. Additionally, in the aftermath of the Mavi Marmara incident, Azerbaijan stubbornly maintained an independent Israel policy despite Turkey’s best efforts to influence them. The other main issue is the limitations of Azerbaijan’s hydrocarbon reserves. Azerbaijani oil will peak within 10 years, and their natural gas reserves will not see them beyond the next half-century. Thus, it will be important for them to develop a new long-term economic strategy. Based on larger economic developments in the region, a transportation hub strategy is the most strategic option and work on this project is already well underway.

New technological developments in North America will prove to have longstanding repercussions for the Caucasus region. Shale gas promises a great deal of energy independence for the United States as well as its allies. With gas exports from North America slated to begin as early as 2016, this will put serious pressure on gas prices in Europe, which may render many ambitious energy transport projects in the region unfeasible. What may prove to be more frightening, especially to Georgia, is if this development also leads to less American engagement in the region. Additionally, NATO forces will begin drawing down from Afghanistan in 2014, primarily through Georgian and Azerbaijani airspace. While providing a temporary spotlight, this will remove yet another major US interest in the region.

Despite sharing a Shia Islamic heritage, Iran has generally contended with Azerbaijan instead of cooperated with it. On the contrary, it has used Armenia as a counterweight to its northern neighbor and ironically enough become one of Armenia’s only windows to the outside world. Iran has been linked to terrorist activities in Georgia and Azerbaijan, and many see their actions as part of a larger proxy war with Israel.

Russia demonstrated its continued presence in the region through its military actions in Georgia in 2008. The Russian military advanced to within kilometers of Tbilisi, where they could have severed Turkey’s connection with the Caspian. Since this action, Russia has demanded linkages to most major transit projects in the region, which could be interpreted as them taking their cut in exchange for not taking anything greater in the region by force.

We can assume that Turkey’s role in the South Caucasus has been dependent on the following factors:

● Balancing of its NATO commitments with its excellent economic relationship with Russian Federation;
● Its shared interest with Georgia in positioning itself as a transit hub for hydrocarbons from the Caspian basin;
● Its ethnic kinship with Azerbaijan and the ensuing domestic pressure to support Baku in its conflict with Yerevan;
● And its historically fraught relationship with Armenia and Turkey’s lack of direct influence over the peace process itself.

Under these circumstances, Turkey will likely become more involved with Azerbaijan and Georgia in terms of developing cooperation in trade and energy and begin to adopt cautious policies towards conflict zones in order not to challenge the regional balance of power. Consultations with EU, however, can open up new opportunities for cautiously developing active policies vis-à-vis the entire region. It will contribute to the South Caucasus integration in the Europe, which of course will lie upon Turkey’s future aspirations, and strategy in the region.

By: Joshua Bartlett and Nino Samvelidze