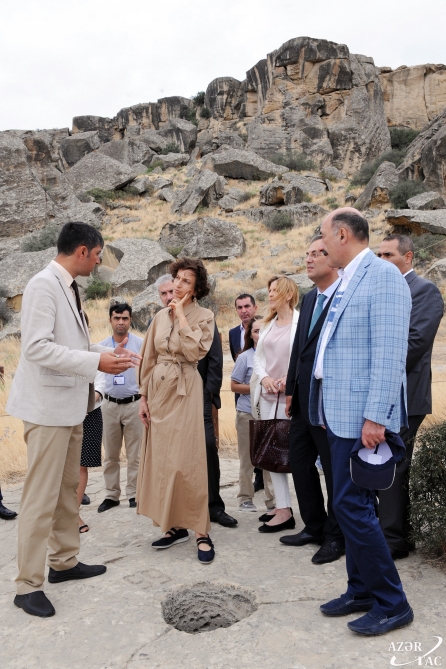 She first viewed the exhibits at a museum created in the territory of the reserve.

In 2007 Gobustan was declared a UNESCO World Heritage Site considered to be of “outstanding universal value” for the quality and density of its rock art engravings depicting images of hunting, fauna, flora and lifestyles in pre-historic times and for the cultural continuity between prehistoric and medieval times that the site reflects.

Gobustan Rock Art Cultural Landscape covers three areas of a plateau of rocky boulders rising out of the semi-desert of central Azerbaijan, with an outstanding collection of more than 6,000 rock engravings bearing testimony to 40,000 years of rock art. The site also features the remains of inhabited caves, settlements and burials, all reflecting an intensive human use by the inhabitants of the area during the wet period that followed the last Ice Age, from the Upper Palaeolithic to the Middle Ages. The site, which covers an area of 537 ha, is part of the larger protected Gobustan Reservation. Archaeological research of more than 20 dwellings and shelters, more than 40 burial mounds was carried out.