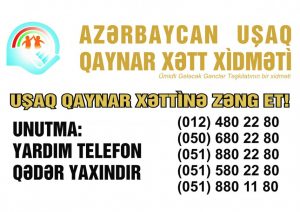 Children Hotline Service established with the initiative and support of “Azercell Telecom” LLC in 2010 with the aim to defend the children and protect their rights has revealed the report on results of the previous year. During 2018, the service received 3581 calls, 1909 out of which were referred to educational, 426 to psychological, 235 to social, 429 to legal, 177 to health and 337 to other fields. 1432 calls were received via landline telephones, whereas 1995 by cell phones and 54 by SMS.

According to the analysis of the calls, concerns and psychological problems faced by the children are mainly caused by low awareness of parents in this field. Parents experience anxiety and disturbance when their children become emotionally stressed, socially isolated, aggressive and afraid, especially at the beginning of school life, consequently leading to rude treatment against them. However, most applicants were those who suffer from interpersonal conflicts. Main reason of the issue seems to be discord with parents or peers and aggression which serves as a mechanism of self-defense.

Notably, confidentiality is the main principle of Children’s Hotline Service.

“Azerbaijan Children Hotline Service” aims to provide social service, basic psychological and legal assistance, prompt help to children with various issues, to consult them on the solution of different problems and refer to rehabilitation centers and other services.

This service was established with the view to solve the problems of children who live in public orphanages, work in streets, become subject to exploitation and violence, mistreatment, face psychological and emotional problems, suffer from limited physical or mental abilities, as well as those who come from socially-endangered families, are in need of special care and protection. Notably, “Azerbaijan Children Hotline Service” has received 36.289 calls during its operation.