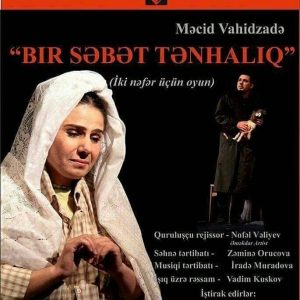 Azerbaijan State Theater of the Young Spectator will take part in the Fajr International Theater Festival in Iran.

Azerbaijani theater production “Bir səbət tənhalıq” will be presented in the city of Ardabilat on January 8-9, Trend Life reported.

The play is based on the work of playwright Majid Vahidzade.

The play tells about the girl’s life, her anxieties, fears, dreams and hopes. Lonely girl has no one to talk to. But one day a young man appears next to her, who is just as lost in life, lonely and miserable as she is …

Since its establishment, Fajr International Film Festival has played a vital role in the development of the Iranian Cinema. Every year, veteran directors and new filmmakers devotedly present their works in the festival.

Azerbaijan State Theater of Young Spectator plays an important role in shaping the artistic and aesthetic taste of the young generation and inculcating high moral and spiritual values, occupies a worthy place in the history of the Azerbaijani theater. For many years, outstanding figures of culture and art of the country maintained close creative ties with this theater. Having a rich experience, the State Theater of the Young Spectator has won a great sympathy for art lovers.

The Russian section of the theater started on November 6, 1928 with the same-name spectacle of the play “Five People” by N.Smirnov and S.Serbakov and the Azerbaijani section on January 30, 1930, “Against Red tie” by N.Ivanter.

From July 18, 1936, the Baku Children’s Theater was renamed to “Azerbaijan State Theater of Young Spectators” according to the order of Commissariat of Public Enlightenment of Azerbaijan.

The collective was awarded with the best antique performance at the XII International Festival of Antique Art held in Simferopol on June 4-11, 2010, performing G. Figueredo’s “Aesop”.

The collective performed “Othello” in the 32nd International Festival “Fajr”, held on February 4-8, 2011 in Kurgan, Iran, and returned to the homeland with success.

According to the decision No 41 of the Cabinet of Ministers of the Republic of Azerbaijan of March 19, 2009, Azerbaijan State Youth Theater and decision of September 30, 2009 the Baku Camera Theater were joined to the Azerbaijan State Theater of Young Spectators. After major renovation and reconstruction in April of the same year, the theater continued its activity in the building, which was provided with new techniques and modern design.

The theater actively participates in the propaganda of the cultural achievements of Azerbaijan.