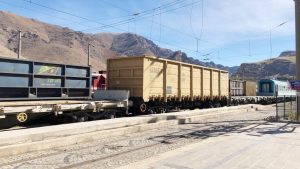 A car of Azerbaijan Railways was included into a local Turkish train at the Kars station and proceeded through such large stations as Sarikamis, Erzurum, Erzincan, Divrigi and Bostankaya to the Sivas station, traveling the distance in eight hours.

The test results showed that the freight cars belonging to Azerbaijan Railways can be used in cargo transportation in the territory of Turkey and can play a significant role in the mutual cargo turnover.

The track gauge in Azerbaijan is 1,520 millimeters, while in Turkey it is 1,435 millimeters (narrow gauge). Bogies are replaced at Georgia’s Akhalkalaki Station.